Is it ever too late to face up to what you have become? 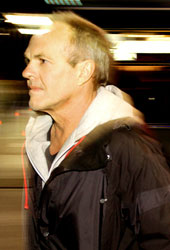 Stephen has had 20 plays and four short films produced, and five Exhibitions. He has been commissioned often and directs/performs his work. He has won two AWGIE Awards from The Australian Writers Guild, an Adelaide Fringe Award, The Rhonda Jancovic Poetry Award for Social Justice and many press awards. He was Shortlisted for the Patrick White and Queensland Premier Drama Awards, Overland’s Fair Australia Fiction Prize, a Greenroom Best Independent Actor Award and several poetry prizes. He has received International literature residencies from The Australia Council to Canada, USA and Ireland, an Asia-link literature residency India and an Island Of Residencies to Tasmania.

His plays have been read, toured and produced and he has performed nationally and internationally. He has been Artistic Director of many events including community arts events and productions. He has worked with theatre companies nationally.

Previous articleAutism advocacy and research misses the mark if autistic people are left out
Next articleWhy does some tap water taste weird?