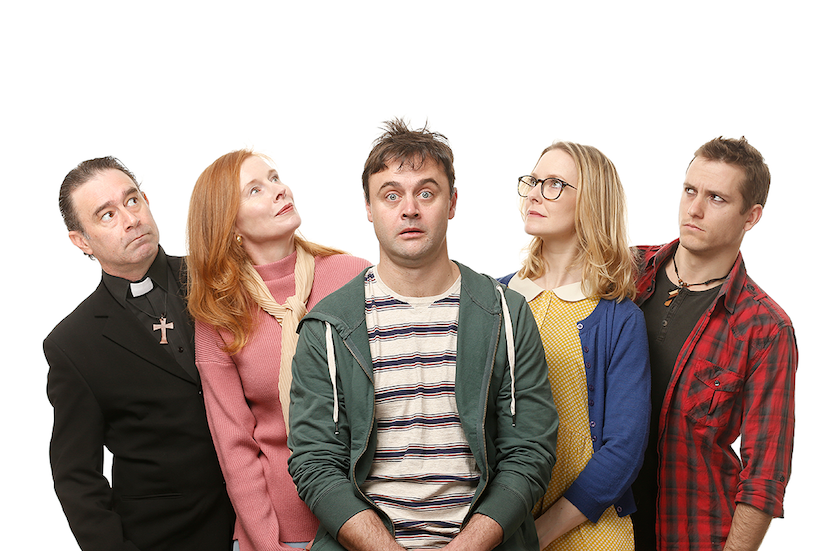 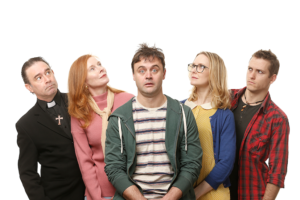 The critically acclaimed American play HAND TO GOD, about a demonic sock puppet that wreaks havoc on relationships and faith in a small Texas town, will have its Australian premiere at The Alex Theatre St Kilda from 22nd February 2018, for a strictly limited season.

In this pure black comedy, which received five Tony Award nominations in 2015 including Best Play, something devilish is lurking in a church basement puppet show in Cypress, Texas. And his name is…Tyrone. He may look like an innocent sock puppet, but when he infiltrates the angst-ridden church youth group and takes possession of Jason’s arm, all hell breaks loose. Spectacularly foul-mouthed and wickedly scandalous, Tyrone shocks the congregation with his outrageous insinuations, exposing their deepest secrets—and teaching us all about love, grief and what it means to be human. Following on from Broadway and London runs, this darkly delightful and wildly funny comedy will equally shock and delight audiences.

Director Gary Abrahams said “When I first read the script I knew I had to do it. I hadn’t laughed so much or so loudly in ages, and I was so taken with the daring of Robert Askins writing. It’s an incredibly smart and very funny new play that reveals itself to be something quite special. I absolutely see why it’s been such a hit worldwide and I’ve no doubt audiences will love it just as much here. Maybe even more so, Australians have a real love of risque and irreverent humour. What could be more fun than a wild than an irreverent comedy that dramatizes the battle between good and evil in such a surprising way? Hand To God is truly outrageous—there are moments that make you scream with horror and laughter at the same time. I guess you could say it’s a simple story about a puppet who takes over the hand—then the life—of a small-town teen, tearing up the stage as he does it. But as you watch it, you see that playwright Rob Askin has also got something important to say about hypocrisy, belief, and grief—and the ridiculous pleasures of bad behaviour. The play is filthy and hilarious and perverse and also a little bit heartbreaking.”

Producer Aleksander Vass remarked, “Gary Abrahams has a feel for comedy like very few people I know and Hand to God requires a director who can unleash its subversively brash and outrageous spirit. Gary previously directed Bad Jews for us and I knew he was the perfect choice to helm this production.”

CRITICS PRAISE FOR HAND TO GOD

It can’t be outdone – and shouldn’t be missed. – New York Daily News

Nothing is more exciting than a new play that takes you by surprise. – Wall Street Journal

Since graduating from QUT, Gyton has forged a remarkable career in film, theatre and television. His feature film credits include The Dressmaker, Don’t Tell, The Reef, Beneath Hill 60, Balibo and Prime Mover. Gyton is renowned for his television performances and has appeared in House Husbands (Series 1 to 4) as series regular ‘Kane’, Fat Tony & Co, Cliffy,30 Seconds, True Story With Hamish and Andy, Rescue Special Ops, East West 101, All Saints, Bond and Underbelly where Gyton’s portrayal of Carl Williams garnered critical acclaim with an AFI Award for Best Actor in a Television Series and a Silver Logie for Most Outstanding Actor. He was recently seen fronting the animal loving programme Pooches at Play and will soon be seen in a telemovie based on the life of Olivia Newton-John. Gyton’s most recent theatre appearance was in Opera Australia’s production of South Pacific in the role of ‘Luther Bilis’. Othertheatre credits include Domestic Bliss for the Old Fitzroy Theatre, Vincent in Brixton for the Ensemble Theatre, The Removalist for La Boite Theatre, The Blue Roof for Jigsaw Theatre Company and Vertigo and The Virginia for Tamarama Rock Surfers. He performed the title role in La Boite’s production of Ruben Guthrie, where he received a Matilda Award Nomination for Best Male Actor in a Leading Role.

Alison Whyte is one of Australia’s most accomplished and celebrated actors, with an outstanding reputation in theatre, film and television. On the small screen, Alison has been seen in numerous productions, including The Doctor Blake Mysteries, Miss Fisher’s Murder Mysteries, Tangle, Satisfaction, City Homicide, Marshall Law, Sea Change, Good Guys Bad Guys, G.P. and the critically acclaimed Frontline, amongst many others. Alison has most recently been seen in The Kettering Incident and Glitch. Amongst her numerous films include The Dressmaker, Centreplace, The Jammed, Subterano and Saturday Night.

Grant Piro’s vast experience over the past 35 years has allowed him to work in every facet of the industry, appearing in well over one hundred productions, as well as being one of Australia’s busiest voice-over actors.  His work has been recognised with several Green Room Award nominations and two wins (The Producers and The Merry Widow) along with both Helpmann and AACTA nominations.

Grant began his career at age 16 with the soap opera Sons and Daughters during the early 1980’s. Since then, his thriving television career has won him roles on Janus (AACTA nomination), Correlli, GP, Wildside, Seachange, City Homicide, Miss Fisher’s Murder Mysteries, and many, many more. Most recently, Grant has been seen in Newton’s Law, The Ex PM, and as Dustin Hoffman in Hoges: The Paul Hogan Story. Grant also wrote and hosted the 90’s cult television programme Couch Potato.

He has appeared in more than twenty movies. Among them are Bad Boy Bubby, Darkness Falls, The Outsider, The Condemned, Crime and Punishment, Crocodile Dundee in LA, The Lighthorsemen, and most recently Mormon Yankees: The Spirit of the Game.

On-stage highlights include Realism, Moby Dick, Laughter on the 23rd Floor, The 39 Steps, Cat on a Hot Tin Roof, His Girl Friday, Hairspray and The Odd Couple, as well as appearing opposite his wife Marina Prior twice, in Dirty Rotten Scoundrels and Hello Dolly!

Jake Speer is a graduate of NIDA. During his training Jake made a memorable impact as Richard in Shakespeare’s Richard III, amongst other roles. Following graduation Jake booked a series regular role on Australia’s highest rating drama series, Home & Away playing Oscar Maguire. Between graduating from NIDA and signing on to Home & Away, Jake also found time to produce, direct, write and star in the documentary film, LEETON: The Formative Years.  Jake was most recently seen in the musical Kinky Boots for Michael Cassell. Other theatre credits include Barefoot in the Park (Ensemble Theatre) & The Government Inspector (regional tour). Film Credits include Backyard Ashes directed by Mark Grentell.

Morgana O’Reilly has enjoyed a flourishing career in film, theatre and television in both Australia and New Zealand. Since graduating from UNITEC School of Performing Arts New Zealand in 2006, she has work consistently on stage, television and film between New Zealand and Australia.

In 2014 she gained much applause for her role as Kylie Bucknell in NZ horror/comedyHousebound which premiered at the South by South West Film Festival in 2014.

In television, Morgana was a series regular in iconic drama Neighbours as ‘Naomi Canning’ from 2013 to 2015. Following this, she appeared in Rake, Wanted, Offspring and the Aunty Donna pilot Chaperones. In New Zealand, Morgana held the lead in the Screentime NZ telemovies Safehouse and in Comedia Pictures/TVNZ’s Billy, playing the wife of iconic New Zealand comedian Billy T James. Other television credits include Sunny Skies as core cast member ‘Nicky’, This is Littleton, Nothing Trivial, 1000 Apologies and The Jacqui Brown Diaries.

Renowned for her exceptional theatre performances, Morgana’s theatre credits include Streetcar Named Desire, When the Rain Stops Falling, Bare and The Ensemble Project with Silo Theatre, as well as the recent Amadeus and Venus in Fur with the Auckland Theatre Company. Other credits include Managing Carmen with the Ensemble Theatre, Othello with Peach Theatre Company as ‘Desdemona’, and The Height of the Eiffel Tower performed in the Auckland Fringe Festival, the New York Fringe Festival and most famously, in people’s homes all over the world as part of ‘The Livingroom Tour’. This enormously successful solo show was devised and written by Morgana O’Reilly and Abigail Greenwood and has received much praise wherever shown.

Since graduating from The Victorian College of The Arts Gary has worked extensively as a director, writer and dramaturge. He is a recipient of THE GRACE WILSON TRUST AWARD for writing, THE JIM MARKS SCHOLARSHIP for Artistic Practice and THE MIKE WALSH FELLOWSHIP for directing.  He has recently directed and produced “Angels In America: Part One: Millennium Approaches and Part Two: Perestroika” with Cameron Lukey productions, the Australian premiere of the hit broadway play “Buyer and Cellar” for The Melbourne Theatre Company , the Australian premiere and national tour of “Bad Jews” for The Vass Theatre Group, “Resident Alien” for Cameron Lukey Productions, and the national tour of his adaptation of “Therese Raquin” for his company Dirty Pretty Theatre.  Other recent credits include “ROAM”, “The Pride“, “Day One. A Hotel. Evening“, “Laramie.10 Years On” and “Oh Well Never Mind Bye” all for Red Stitch Actors Theatre.

For his own company Dirty Pretty Theatre he has directed and written the plays “The Lonely Wolf” “Acts Of Deceit (Between Strangers In A Room)” , “Something Natural but Very Childish” , “The Bitter Tears of Petra Von Kant”  and “Therese Raquin”.  He received a Green Room Award for Best Director in Independent Theatre  in 2010, and was nominated in the same category for his work in 2014.

Robert Askins (Playwright) was born in Cypress Texas in 1980. He moved to New York in 2005. Rob’s play’s include “Princes of Waco”, “Matthew and the Pastor’s Wife” and “Doll Parts”.