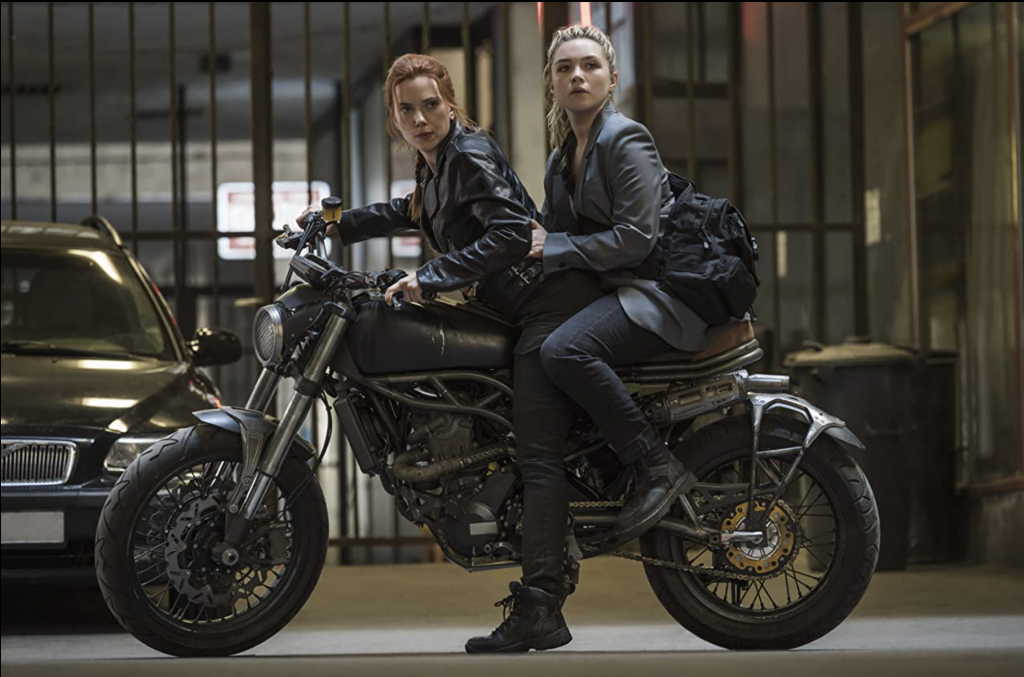 Sometimes even a juggernaut like Marvel Studios fails to give the people what they want. Among their key roster, there’s one star who hasn’t been given their due. The star in question is Natasha Romanov aka Black Widow, played by Scarlett Johansson. Debuting all the way back in Iron Man 2 (2010), Natasha quickly became a fan favourite character, as audiences were intrigued by her endlessly mysterious nature, and enchanted by Johansson’s charming and layered performance. While her Avengers (2012) co-stars Robert Downey Jr, Chris Hemsworth and Chris Evans got to enjoy their own individual successes, Marvel seemed to be actively avoiding giving Johansson her moment in the spotlight. That mistake is finally being rectified with the release of Black Widow (2021), Marvel’s espionage thriller directed by Cate Shortland.

Set before the events Avengers: Infinity War (2018), Natasha finds herself on the run from the United States Government, following her actions in Captain America: Civil War (2016). She is being chased all over the world, but it’s not so easy to catch a spy who has spent a lifetime covering their tracks. Things take an unexpected turn when Natasha discovers that her adopted sister Yelena Belova (Florence Pugh) is still a member of the infamous Red Room program, the network of female assassins previously thought to be destroyed. Natasha has spent her whole life trying to make up for the horrible things she did while under their control, which makes their mysterious re-emergence something that must be dealt with promptly. This isn’t an easy task as the Red Room has an imposing agent named Taskmaster in the field.

Marvel Studios‘ command of their craft makes it hard to comment on the film’s general filmmaking prowess. At this point we pretty much expect top notch visual effects, thrilling action, and expertly paced storytelling as soon as we see the studio’s logo. Marvel is such a reliable blockbuster brand, meaning the standard blockbuster formula might seem unimpressive. Regardless, it can’t be ignored just how seamless the Marvel machinery is. From the clean cinematography, polished CGI, and jaw-dropping fight choreography, it really feels like they got the best out of the $200 million budget. A few years ago, not every Marvel film could match the spectacle of their biggest franchises, but it now seems like even a grounded spy film can be a major movie event.

With that in mind, it’s always fun to see which genre’s Marvel pulls inspiration from when crafting their films. Following in the footsteps of Captain America: Winter Soldier (2014), Black Widow takes the form of an espionage thriller, but arguably to an even greater degree. Shortland has combined elements from The Bourne Identity (2002), The Manchurian Candidate (1962) and Cold War era James Bond films. The plot takes us to plenty of exotic locales, putting our heroes in a series of death defying sequences and explosive set pieces. This may be a superhero film, but the bullets, blades and punches do indeed draw blood. In this case, it’s actually refreshing to see one of these films depict the damage these characters take. The stakes are raised to believably tense levels, as well as force the audience to fear for character’s safety. Black Widow has a darker streak to it, which you definitely want from the world of espionage, assassins and spies.

That being said, this brave level of tonal darkness isn’t maintained as tightly as it should be. The entire first half of the film keeps things gritty, tense, mysterious and narratively nuanced, only to drop most of it in favour of comedy, harmless fun and sentimentality. To be fair, Marvel can successfully juggle all these tones in a single film, but the arrangement is a little off this time around. For a long stretch, we are made to expect a consistently tense story with psychologically complex stakes, but it’s not fully developed by the end. Moments that definitely should’ve dealt with the darker aspects are brushed over with awkward comedy, which sadly saps some of the emotional resonance from the conclusion. Additionally, the shift in tone also affects which thematics are highlighted, but this may have been the incorrect choice seeing as the underplayed ideas were more narratively compelling. This doesn’t sink the film by any means, it just prevents it from becoming the transcendent spy thriller it set itself up to be.

Coming off successes like Somersault (2004), Lore (2012) and Berlin Syndrome (2017), director Cate Shortland was a prime choice for Black Widow. Her subtle ability to develop emotional introspective people is in full effect here, as a lot of time is spent just allowing the characters to interact, talk about their feelings and work out their baggage. Given how underserved Scarlett Johansson has been, it’s rewarding to finally see her get the chance to flesh out Natasha’s world. It’s so carefully written that it adds layers without defying what has come before. Frustratingly, all of this is communicated through exposition, slowing down the proceedings at points where it probably should’ve sped up. As a result the mystery plot also suffers, as we are forced to jump a few steps to make up for lost time.

As usual, any imperfections Marvel films have are generally smoothed over by the fun cast of characters. As expected, Scarlett Johansson shines as Natasha, which (in a weird way) is just salt in the wound for her not getting more to do until now. The addition of Florence Pugh as Yelena Belova is a revelation, as she steals the show with her infectious presence and dry wit. If we have to continue this story without Johansson, Pugh is more than capable to pick up the slack. Unfortunately, not all the characters get their chance in the spotlight, most notably the Red Guardian as played by David Harbour, and the mysterious villain Taskmaster. Both are enjoyable to watch and add little moments, but neither are utilised to their full potential. It’s not hard to see how they could’ve been used to elevate the narrative, but they end up being only as memorable as the costumes they wear.

Despite its flaws, Black Widow is not a bad film. However, it is an endlessly frustrating one, as it’s not hard to see how it could’ve been a lot more than what it ended up being. When you watch something like Ant-Man and The Wasp (2018), you’re still satisfied even though it’s fairly light weight because it sets itself up to be a light romp. Black Widow succeeds in being a perfectly accessible, fun, well made and light action film, but in-between the margins you can see it had the potential to be something grander.

Best way to watch it: It will probably work best in chronological order, so watch it after Captain America: Civil War.