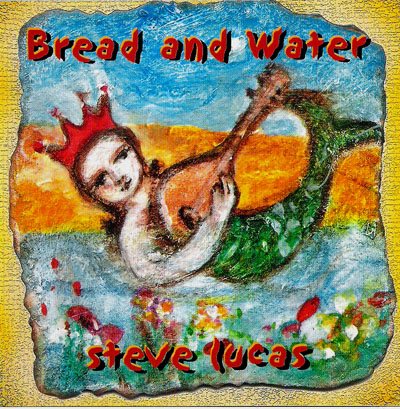 Back in the 90’s while between studio sessions with Bigger Than Jesus (the Killer Vision album), I felt the need for a change in intensity, some to soothe my nerves after all the screaming and howling so I snuck off to Hot House and made a solo record. It only took 2 days but what a wonderful two days.

Like most of my approaches to recording, it started off very simply. I went in with my battered 12 string Yari and began laying down guides to a click track. Some songs I double-tracked or played various overlays, leads etc while others were better just left alone, stark but somehow more intimate.

After 14 hours straight of playing and singing we had a pretty nice selection of songs. Now back then I was still using 2″ tape and being on a budget of practically zero dollars we (Craig Harneth and I) to dedicate no more than 12 tracks to a song so we could run them (alt songs) side by side thus maximising the use of the tape and minimising my costings. So that was day one.

Day two was when we really started to have fun. We decided to call in favours from friends and invite them in to contribute whatever they wanted. The only rule was, you’d get two rehearsal passes then one live take. Secretly we’d record from the first pass, most of the guys nailed on the second ‘rehearsal’ so there was no need for a third take. I called up Chris Wilson and asked if he was doing anything and if not would he like to come in and play on a few tracks. He said yes and that was the beginning of a series of cameos that would follow through the day.

Chris was to say the very least – enthusiastic. He played harp, tambourine, eggs and joined me on backing vocals. He was fantastic. The next person I called was Paul Kelly… I was pretty nervous about that but he was all for it. He came in and did a duet with me on the first song I ever wrote (when I was 16) called Movin’ On (also a song that X played many, many times and recorded). Andrew Pendlebury was next, he played some beautiful lead lines over the song I did with Paul as well as playing on a track I sang with Chris, called Over The Mountain. Andrew makes everything look so easy. He blew me away.

It’s hard to remember who was next in… as we were listening to tracks we’d get an idea like “a tin whistle would sound good in this one, who plays a tin whistle?” Someone would pipe in with a fellow they new and then we’d call them up and invite them along. Nigel Mclean played violin on two tracks, Dave Cambell played mandolin and tin whistle on a couple of tacks as well, Chris Doheny did the most amazing set of block harmonies!

We had Chris Doheny also playing fuzzy Rhodes piano, Sam Panetta playing organ… Cameron Gould on percussion, Brett Kingman came in and played some slide guitar for me… it was the most amazing experience. We even had a fellow by the name of Dean Rochford come in and play tubs on one of the tracks! Craig Harneth joined in as well with finger snaps and bass on a song or two.

It could have been a circus or a madhouse but instead, it was the most organic, joyous, non-ego gatherings of talent I have ever known. At the end of day two, I was presented with a couple of bottles of Champagne and a huge bunch of flowers… lol… beautiful memories. The mixdown sessions were a breeze as most of it was done during the recording process. Most of the material was written when I was still married to my first wife Amanda, we lived in a little house known as ‘Bottletop Cottage’ in rural Victoria.

The songs were about our courtship (in the main) plus reflections on my time in X (X were having one of our many breakdowns around then) and some other ‘observational’ kind of stuff about the people in our innermost circle. I find this to be one of the most personal and intimate recordings I have ever done, still to this day. This album has returned to me once again. Or leases are done and all obligations fulfilled.

I have it now on my Bandcamp site for digital downloading if you want to check it out. http://stevelucas.bandcamp.com/ There are photos taken of the sessions by my very dear friend Helene Rosanov as ‘bonus’ material should you choose to buy a copy. As I get older I find the ever-increasing need to gather all my old bits and pieces under the one roof, partly because of sentiment but mostly to keep alive the memory, the spirit, and friendship that existed during the sessions.

Our past is the foundation of our present and our present, no matter how fleeting is the makings of our future. I am still a long shot away from Champagne and Caviar, but Bread and Water will sustain should all else fail.