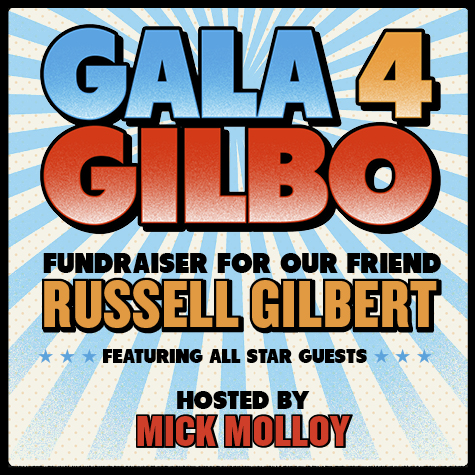 An all-star line-up of Australia’s top comedians are rallying to help their friend and one of Australia’s favourite entertainers, Russell Gilbert, staging a fundraiser event – GALA FOR GILBO – at Palais Theatre on Sunday, July 17.

One of our most-loved comedians, Russell suffered through a devastating series of personal and medical issues in late 2015.   A brain aneurysm, followed by a stroke has left him reeling.  His family and close friends say that the former star of Hey Hey, It’s Saturday, whose TV career began in 1998 with The Comedy Company – two of the most popular Australian comedy shows of all time – will not be able to work again in the foreseeable future …  if at all.

All profits from Gala For Gilbo will help to provide for his rehabilitation and ongoing care, and to help him get back on his feet.

On the night, a silent auction will take place, with dozens of Big Ticket items available to bid on prior to the show and at interval.

Those of Russell’s famous friends who are unable to appear live, will each pre-record a special shout out, to be screened exclusively at Gala For Gilbo: Rob Sitch (reprising his much-loved Frontline character, Mike Moore), Daryl Somers and more.

MC at the event, and one of Gilbo’s oldest mates, Mick Molloy says, “Russell Gilbert is like a big brother to me. He is one of the funniest blokes I’ve ever met, on or off the stage and he’s coming off a pretty bad year that has involved some pretty major battles.

“Gilbo has always been there for many of us when we needed him and now it’s our turn to help out a mate.

“Not one person we asked to be part of this show said no … I think that says a lot about the man.

“Come along and enjoy the greatest line up of comics you will ever see under the one roof in this lifetime. I can’t wait for this night.

“Comics love an excuse to get together and have a few laughs, especially when it’s for a good cause and a good bloke like Gilbo. I think this night, for many reasons, will be one we all remember fondly, especially Russell, who’s been doing it tough for a while now.”

Russell Gilbert says, “It’s so great to know you have such amazing support from your friends. What a line-up of comics! The best in the country. And Mick as well.”