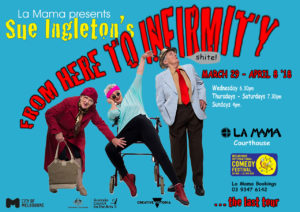 FROM HERE TO INFIRMITY

BILL RAWLINGS, whose very first show in 1981 was called FROM HERE TO MATERNITY, has just survived the white ribbon campaign and boutique beer and refuses to go quietly to the crematorium. ‘There’s a million women out there who still want me!’

EDITH WISE, at 88, has been horrifying audiences for 30 YEARS and hasn’t aged a day! She went to the crematorium but there was a queue so she refused to wait- ‘Because I cannot wait for death, he’d better choose someone else,’ she gaily misquoted Emily Dickinson as she downed another Red Bull.

GEMMA HATCHBACK, tryptanoled, xanaxed and turmericked out of her brain, recovering from a Cosmetic Tourism labia reduction and an Ashley Madison disaster. So preserved is she, by every experimental drug on the planet, her body can never die. Anyway, she can’t even spell ‘crematorium’ nor follow a google map and she actually thinks it’s where you buy cream at Myers.

Sue wishes to make this, her LAST SHOW, a SMASH HIT & A SOLD OUT season- so please, give her no reason to keep coming back! Interviews are guaranteed hilarious, unpublishable for the most part but then why not take a chance, you might win a Walkley!

‘Sue Ingleton’s solo show is a must. Ingleton’s skill is quite stunning. This is the stuff of true satire‘. National Times. Sydney

‘Few have at their disposal the wit and inventiveness, to say nothing of the outrageous vulgarity and spectacular bad taste which Sue Ingleton displays…this is comedy which is brittle, abrasive but also very funny.’