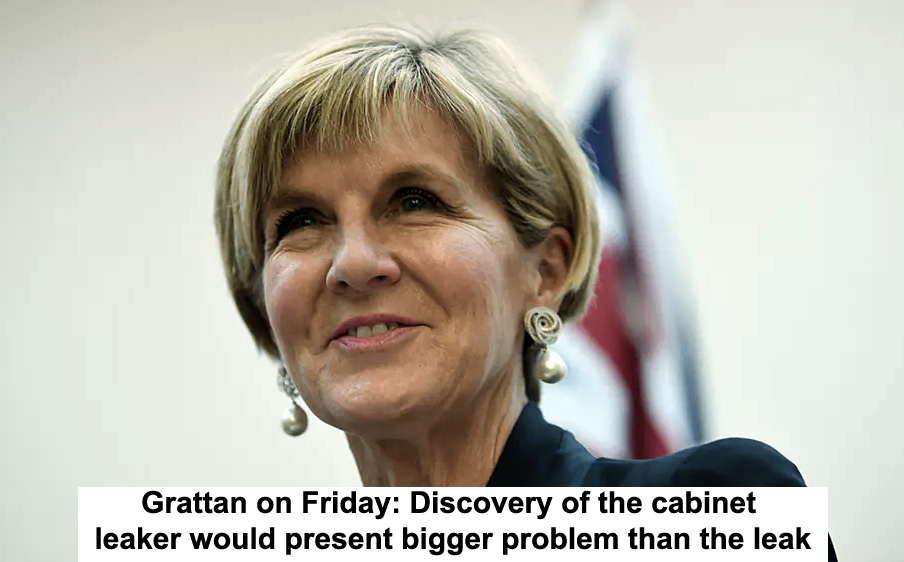 What on earth was Julie Bishop thinking when she declared she’d support a “formal investigation” into this week’s damaging cabinet leak?

Bishop was defending herself as the questions swirled about who might be the leaker, saying it wasn’t her. But to have one of the most senior ministers – she’s deputy Liberal leader too – talking about a probe into cabinet members just underlines the serious breakdown not just in the government’s discipline but in its common sense as well.

The leaked story was by the Daily Telegraph’s Sharri Markson, reporting that a “despondent”: cabinet had discussed, in the context of the backbench revolt on banking, whether the government should capitulate and hold a royal commission.

Treasurer Scott Morrison said no; Peter Dutton, one of the conservatives who has had Malcolm Turnbull’s back, was reported to be “opposed in principle” but open to the idea on pragmatic grounds. But Turnbull remains against changing policy and has said this publicly.

For Bishop the affair is a rerun of an old movie. After a leak from the Abbott cabinet, Bishop denied being the source, saying that if the prime minister found the culprit he would “take some action”.

In retrospect, if not always at the time, it seems obvious the 2015 leaks were mostly inspired by those wanting a coup.

This time, the “who” and the “why” aren’t clear. There is no evidence of any organised push against Turnbull, like there was against Abbott, although leadership speculation has become media grist.

The leaks, of which there have been several, may be driven by the general angst around or reflect jostling by various players in uncertain times.

We’ve seen publicly the respective positioning by Morrison and Dutton on the marriage legislation, with Morrison putting himself at the forefront of the “safeguards” brigade and Dutton – on this issues as on others – looking for a compromise way through.

Anyway, there won’t be an investigation. The Australian Federal Police almost never finds the source of leaks to the media, but imagine if it had an unexpected success! That indeed would present a problem.

Bill Shorten described the situation as the government eating itself. Alternatively, think of an army in untidy retreat, sloshing through heavy mud, when it becomes every soldier for himself.

We’re back to the Gillard days or, for those with a sense of history, to the Liberal party of the late 1960s, as it lost its way in the post-Menzies years.

Despite cabinet’s now well-canvassed discussion, the government is still faced with the push from the Nationals’ rebels for parliament to set up a commission of inquiry (only marginally different from a royal commission) into the banks.

Turnbull has tried to minimise the scope for the rebels and Labor to make trouble by cancelling next week’s House of Representatives sitting, but the action just exposed his weakness.

The rebels are unbowed with Nationals senator Barry O’Sullivan on Thursday circulating his private senator’s bill for “a commission of inquiry into banking, insurance, superannuation, financial and related services”.

O’Sullivan confirms he is determined. “I’m not someone who blinks”, he said. He dismissed suggestions his absent leader, Barnaby Joyce, was trying to dissuade him. He’d spoken to Joyce early on – Joyce just “asked me to keep him posted”.

It should be remembered the Nationals generally have no problem in cracking down on the banks. In fact, if a proposal for a royal commission were put to the Nationals’ party room, it would likely get up. Nationals assistant minister Keith Pitt was blunt on Thursday: “Clearly the government’s position is not for a royal commission, however we do have a number of members in the Nats who think it’s something that they want”.

Amid the tumult, former prime minister John Howard has used the occasion of Friday’s tenth anniversary of being turfed out of office to buy into the contemporary debates on banking and taxation.

The latter debate was reignited after Turnbull held out the prospect of personal income tax relief in a major address on Monday, albeit devoid of detail. On Thursday Finance Minister Mathias Cormann was dealing with scepticism about its affordability, arguing “we have effectively already assumed future further tax cuts in our budget projections”.

Howard claimed a banking commission would be “rank socialism” – to which O’Sullivan says, “I don’t understand what he means”.

As for tax, Howard, who nearly lost office in his (successful) pursuit of a GST, told Sky it would benefit the government “if it were to embrace very significant further tax reform”. This should include the GST, which couldn’t be left “where it is indefinitely”.

The best of luck with that. Turnbull is tossing tax into the mix to try to show voters he has some sugar in his back pocket to put on their tables. But sweeping reform would see losers as well as winners. For a government perennially behind in the polls, with the slenderest majority before it fell into its current minority position, a major tax overhaul including the GST would take more bravery than presently in sight.

It is too early to get a real sense of how that December 16 byelection will go. On a 9.7 % margin, Alexander has a big buffer, as he faces Labor’s Kristina Keneally.

But this week the Liberal campaign, already looking lack lustre, was snagged by an embarrassing 1990s video of Alexander telling a crude Irish joke and another about “a black guy in Chicago” describing a rape.

Alexander wasn’t the only government byelection candidate who became an embarrassment. There was Joyce’s jaunt from his New England campaign to Canberra for “AgDay”, described as the “brainchild” of his good friend Gina Rinehart, who presented him with a $40,000 cheque, reward for being a “champion of our industry”. He only belatedly declined the money.

It was another example of the poor judgement that infects this government. 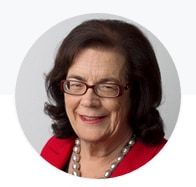