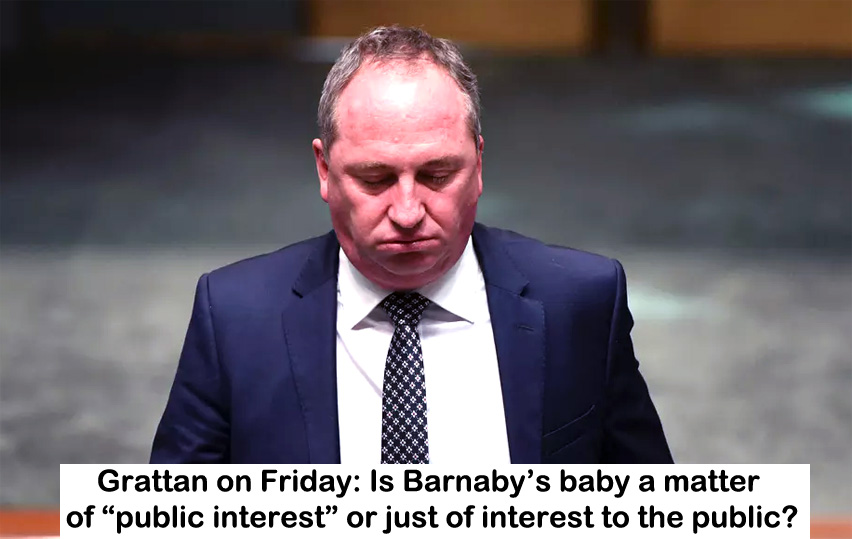 Debate occurred about the reporting of that relationship – which Cairns at the time refused to admit was sexual – but the case for airing was pretty clear given Morosi’s role. She was a political player, through her enormous influence on her boss.

Now we have a controversy over whether it’s been in the public interest for the Daily Telegraph this week to out deputy prime minister Barnaby Joyce’s liaison with his now-former staffer, Vikki Campion, who is expecting his child in April.

There’s one very significant difference between the Joyce-Campion and Cairns-Morosi affairs. No one suggests Campion, who was deliberately transferred out of Joyce’s office nearly a year ago, was a political mover and shaker.

Has the upheaval in his personal life affected Joyce’s performance? No doubt to some extent. He’s reportedly been more distracted and difficult, though his citizenship imbroglio was a factor too.

Government and Labor MPs have backed Joyce’s claim that his personal life should be private. They’re driven partly by collective self-interest. Other MPs have had, or are having, affairs. But many MPs also feel, with some reason, that they have enough intrusion into their lives.

Those defending the publication advance a range of arguments, including that public figures must expect public lives. They say that if Joyce’s circumstances had been exposed earlier, voters in the New England byelection might have been harsher in their judgment. They accuse him of hypocrisy, on the grounds that his personal circumstances were at odds with his stand against same-sex marriage.

They also make the point that in time Joyce’s situation would have been obvious. Or as Daily Telegraph editor Chris Dore colourfully put it, “What would [journalists] have done when he started pushing a pram around Lake Burley Griffin or Parliament House?”.

Personally, I think media publicity about the affair wouldn’t have made much difference in New England, which Joyce retained handsomely. His critics ensured the gossip was widely circulated locally, and most votes are driven by more directly political factors.

On the hypocrisy charge: Joyce acknowledged in his same sex-marriage speech that his marriage had collapsed. And in terms of logic, what you say about marriage equality is separate from what you do in your own heterosexual marriage. While Joyce has been a promoter of family values, it’s not been as a hardline crusader.

As for the story inevitably emerging in the fullness of time – that’s rather different from how it did emerge, with a front page picture of the pregnant Campion.

The Joyce affair comes against a background of the public hating politicians and deeply distrusting the media, and as increasing scrutiny is on the personal behaviour of those, particularly men, in senior positions – in business, politics and, most dramatically, the entertainment world.

The story taps into a resentment among some in the community towards Canberra “insiders”, including journalists, who are thought to be keeping things from the “outsiders” – that is, the public.

The reality is exaggerated, in this age of blanket communications. The bones of the Joyce story were on the internet well before it hit the mainstream media.

Rob Stott, managing editor of Junkee, said on Crikey this week: “As news spreads more and more on social media, the time has long passed since the press gallery was able to hold back information that was being widely circulated in the community.”

But being taken up by the mainstream media gives a story much more impact and cache.

In this context, some journalists have felt the need to justify why they did NOT write the Joyce story, which had been swirling around Canberra for months. They’ve said it was a rumour that couldn’t readily be stood up in face of an unco-operative Joyce office – although that sounds like an excuse rather than an explanation.

But excuses are not required if you don’t believe the public interest demanded the front page expose.

Consider precisely what we are looking at here. A re-partnering, after an affair that started in a ministerial office, that has involved a painful family breakdown. This week’s coverage has made things even more difficult for Joyce’s wife and four daughters. The family’s anguish has been obvious in Natalie Joyce’s bitter public comments.

Gay Alcorn in Guardian Australia points out that Malcolm Turnbull could never have got away with the privacy Joyce sought to claim. Of course that’s true. But lines are drawn all the time. If it had been Joyce’s predecessor, the dour Warren Truss, in similar circumstances, would the treatment have been the same?

It should be stressed that although the 33-year-old Campion is much younger than the 50-year-old Joyce, there is no suggestion she’s a victim of a powerful boss. And they are now a couple – she won’t be a single mother.

The start of the affair while Campion was on Joyce’s staff has raised the question of whether there should be some prohibition on relationships between politicians and staffers.

This week the United States House of Representatives passed legislation banning sexual relationships between members of the House and staff who report to them. The measure has yet to go to the Senate.

The congressional action follows a raft of scandals in the US involving harassment, and the #MeToo movement.

In Canberra, crossbencher Cathy McGowan has seized on the Joyce affair to call for a conversation within the parliament “about a process to address personal relationships within the workplace.”

She pointed to the Congress example and what’s happened in the Australian corporate sector, including the AFL. McGowan said she was happy to begin a conversation ahead of potentially tabling a motion in parliament.

This is not a conversation the major parties want to have. Foreign Minister Julie Bishop, asked about the US move, said: “Government has no business interfering in people’s personal lives and we wouldn’t want to cross the line so that the moral police were able to dictate what happens between consenting adults.”

But McGowan says the Joyce matter has highlighted “the need to talk about MPs as employers, our responsibilities to our staffs and how, if you make a mistake in the public arena, it can be managed in a respectful and effective way. There’s clearly an elephant in the room that needs to be discussed”. 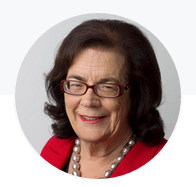