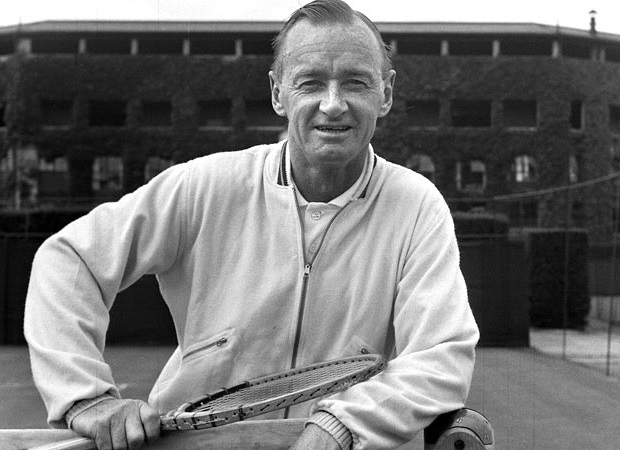 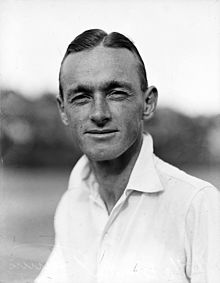 Affectionately known as “Harry”, he was born 12 August, 1906 in Glebe, New South Wales, Australia to parents Henry Hopman (a school teacher) and wife Jeannie and passed away 27 December, 1985.

Up until the age of 13, Hopman was first enthusiastic about soccer a game he played quite well, before changing to tennis.

His father was headmaster where he attended Rosehill Public School, and it was here also whilst playing barefoot, Hopman won his first singles tournament on a court setup in the school playground.

His success as a player continued during secondary school at both Parramatta and Fort Street Boys’ high schools. At the age of 17, Hopman was asked to represent New South Wales in the Linton Cup national junior teams competition. 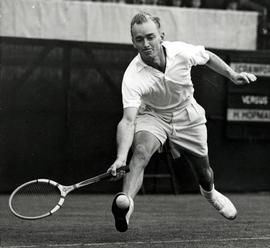 Once school was completed, Hopman gained employment as a salesman working for a Sydney based sports and goods retailer. His employer understood that Hopman had not only a passion to play tennis, but a strong yearning to make it all the way to the top, so he ensured his job wouldn’t interfere with his tennis career and allowed ample time off to pursue it.

In 1925, he teamed up with Jack Crawford to play in the Australian Junior doubles championship. For the next three years in a row, the boys dominated taking home the title. They kept up the momentum in 1929 and 1930 playing as Seniors in the Australian Seniors doubles Championships.

Crawford was always the better player of the two, being a tall and stylish baseline stroke-player, up against the agile and energetic volley dominating game. Hopman lost to Crawford in twenty-seven finals and was runner up to him in the Australia singles titles of 1931 – 1932. Where Hopman lacked as a singles player, he certainly made up for it, when their contrasting styles meshed together in the doubles.

By the time 1933 came around, Hopman was a sportswriter for the Melbourne Herald Newspaper. He had an arrangement that suited both parties where as long as his articles met deadlines, they were happy to give him the time off to travel overseas and play Davis Cup tennis.

In 1934, he married Nell Hall, at St Philips Church of England in Sydney. He met Nell at a junior tennis competition, where the two formed a successful mixed doubles combination. In Australia, they won four titles and in 1935, they became the first husband and wife team to reach the final at Wimbledon.

The Hopman’s lived a very modest lifestyle, renting a house in Hawthorn. To keep his fitness at peek condition, Hopman often ran from Hawthorn to work at  Herald Newspaper Headquarters in the city. Also a keen squash player, he won the Australian amateur squash title three times. (1933, 1934, and 1936). He was a team player of the unsuccessful Australian Davis Cup team of 1928, 1930, and 1932. 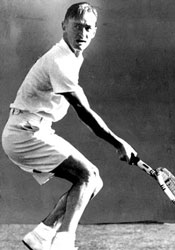 In 1938, he was elected ‘Captain of the team’ and for the first time in fourteen years, he led Australia to it’s first Challenge Round Final, going down 3-2 to the United States. In 1939, once again under his captaincy, Australia finally won the Cup 3-2 after Quist and Bromwich both won their final singles matches.

At the end of World War II, Hopman returned to what he knew best, coaching.

Hopman was overlooked for the captaincy once Davis Cup Competition resumed. From the sidelines, he watched Australia get annihilated by the USA team. Not once, but four times. Finally Hopman was appointed Captain again for a second time, but this time he was a non playing captain/coach. Between 1950 and 1969, it was known as the Hopman Era. 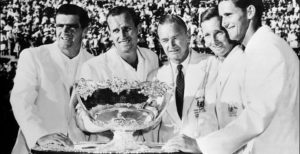 Hopman also had a tournment “The Hopman Cup” named after him also. The Hopman Cup is an annual international eight team indoor hardcourt tennis tournament held in Perth, Western Australia in early January each year. Unlike other major international team tennis tournaments such as the Davis Cup and the Fed Cup, which are for men or women only, the Hopman Cup is a mixed competition in which male and female players are on combined teams and represent their countries.

After Hopmans first wife died of an intracranial tumour in 1968, in 1971 he met and married second surviving wife Lucy Pope Fox, a divorcee at Port Washington, Long Island where he was running a tennis academy.

Since the Hopman Cup was founded in 1989, Lucy travels to the tournament annually from her United States home. 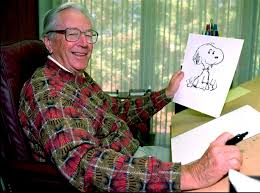 In 1976, Hopman was made a Commander of the British Empire (CBE) for his service to sport.

Childless, Hopman was often accused of treating his young players as children. On tour he would discipline his`boys’ for poor table manners and breaches of curfew among other things. He demanded discipline and drove his team harder than they’d ever been driven, making them spend hours on the court, hitting more balls than many of their opponents would see in their career.

Hopman suffered from deafness for much of his career, and wore a hearing aid installed in horn-rimmed glasses.

In 1956, he gave away journalism to undertake a job in public relations, and later became an investment adviser. In 1962 he purchased a seat on the Melbourne Stock Exchange for £10,000, but neglected to disclose that he had borrowed the money. When he failed to repay the debt, legal action commenced and he was forced to resign the seat.

An avid punter, Hopman felt you got better odds backing horses than tennis players. It wasn’t uncommon for him to spend anywhere up to £500 on a favourite. 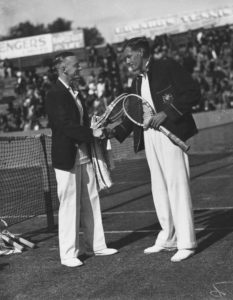 After a string of wins at the pokies in Monte Carlo, Hopman was convinced the number 5 brought him luck. He woke at 5.55 every day, he had 5 sisters, and the Davis Cup was played over five matches.

In 1961 Hopman won £20,000 damages after Mirror Newspapers were found to have defamed him in 1958 by claiming he had been paid for coaching in South Africa.

In 1969, Hopman left the Australian program during a period of financial cutbacks and made the United States his permanent home. He took up coaching again at the Port Washington (N.Y.) Tennis Academy, coaching future American stars Vitas Gerulaitis and John McEnroe. He opened the Hopman Tennis Academy in Largo, Florida in 1971.

As Hopman watched his young players grow wealthy through the game of tennis, he himself chose for his fortune to grow from real estate, and shares in oil and gas.

Hopman died at Seminole, Florida of a heart attack in 1985 and was later cremated. 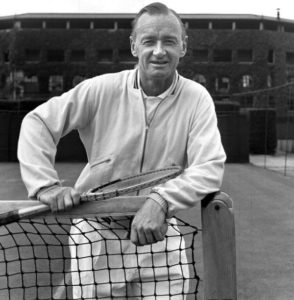