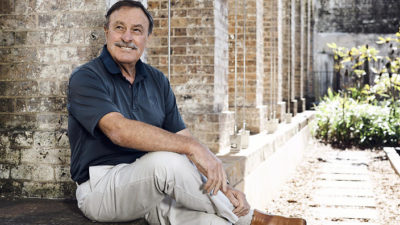 He was one of the many Australians who dominated the court in the 60’s and 70’s and is one of the few men to be ranked number one in both singles and doubles.

As a boy and a natural athlete, Newcombe played, dominated and mastered several sports before choosing Tennis as a career at the age of 10. Born in Sydney, Newcombe said his tennis inspiration came form watching Ken Rosewall, Lew Hoad and Frank Sedgman.

Newcomb: “There was a kind of code that you had as an Australian and that was that you never left the court losing unless you had blood all over you. That’s the sort of toughness you needed to earn your spot to compete on the world stage.”

He was the Australian junior champion (19 years old) from 1961, 1962 and 1963. Also in 1963, Newcombe attracted International attention as one of the youngest Australians ever to play Davis Cup, selected for the final to play singles against the United States of America.  Though beaten by both Dennis Ralston and Chuck McKinley during the 3-2 US victory, Newcombe served notice that he was a player to be reckoned with  pushing Wimbledon Champion McKinley to four gruelling sets in the deciding fifth.

Newcombe won his first grand slam title in 1965 with fellow Aussie Tony Roche winning The Australian Championships doubles title. That same year, the duo won the Wimbledon doubles title, signalling the start not only of an extraordinary string of major titles for Newcombe but also for the two of them as a pair.

From 1965 to 1971 they won 11 of their 12 then-record setting major championships, an accolade that has since been broken by Bob and Mike Bryan (in 2013). To gain a full understanding of how the Aussies were doing at that particular time, all but two of those titles were won playing against Aussie compatriots.

1968 and Newcombe signs a three-year professional contract with Lamar Hunt’s “World Championship Tennis” (WCT) and became part of the “Handsome Eight”. The “Handsome Eight”  was the name given to one professional and seven amateur tennis players who signed with a New Orleans promoter named Dave Dixon in late 1967 and 1968 to play for a newly formed professional tour,World Championship Tennis (WCT). The WTC was backed financially by a wealthy Texas oilman, Lamar Hunt, who had, in 1960, been the prime founder of the American Football League. The Handsome Eight included:

Being a member of the WCT had its drawbacks also. Newcombe as a member of the WCT professional tour group and players union found himself banned by the International Tennis Federation from competing in the 1972 Wimbledon Championships. Still hurt from that decision, Newcombe joined the ATP boycott of the event in 1973. Very popular with the fans, Newcombe’s absence resulted in urgent negotiations that ultimately resolved the issues. He served as President of the Association of Tennis Professionals in 1977 and 1978.

Newcombe took serving, volleying and a hard-driving forehand to new heights; they were the cornerstones of his game. Newk frequently came up with a second-serve ace. His heavy serve was possibly the best of his era.

A man with such tenacity had to have a tactical edge over his opponents.  Newcombe said that 45 minutes before each match he ran a dress rehearsal through his mind on how he visualized play would unfold. That mental approach and attention to scouting his opponent’s strengths and weaknesses provided Newcombe with a tactical edge that gave strength to his own performance. That preparation led him to seven major singles titles. All Newcombe’s singles titles were played on grass. The grass surface favored his game and the French Open’s clay surface was the only major singles championship he never won.

It was in singles that Newcombe made his name. He was a two time winner of the Australian Open, 1973 and 1975, a three time winner of Wimbledon, 1967, 1970, 1971, and the US Open twice, 1967 and 1973. Newcombe and Laver are the only players to ever win both the US Open and Wimbledon men’s singles titles as an amateur and as a professional. Newcombe was the last amateur champion at Wimbledon in 1967.

Newcombe was one of the first to sign a contract to play World Team Tennis (with Houston) in 1974, his presence helping give the new league credibility, although he played just that one season. His best pro season was 1971, when he won five of 19 singles tournaments on a 53-14 match record. He totaled 73 pro titles, 32 in singles, 41 in doubles, and won $1,062,408.

Whether you recognise him by that trade mark thick, dark moustache or his nickname “Newk”, Newcomb was easily identifiable. His new sex symbol image helped him land a profile picture on the 1974 cover of Sports Illustrated.

Newcombe was captain of the Australian Davis Cup team from 1995 until 2000.

Away from the tennis circuit Newcombe has published half a dozen books, the most notable being Newk: Life on and off the court in 2014 and The Power Within: How to Create a High Performance Mind in 2012. Newk also does tennis commentary for various tournaments when required and is still actively working behind the scenes of the Australian Tennis fraternity.