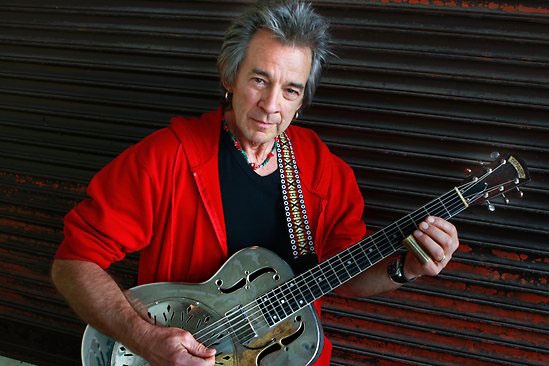 THIS INTERVIEW HAS THE FULL CO-OPERATION OF KEVIN BORICH

Kevin Borich is a highly acclaimed Aussie Blues, Rock and Funk Musician. He is always in very high demand, due to cementing himself as part of the Australian Music Scene. 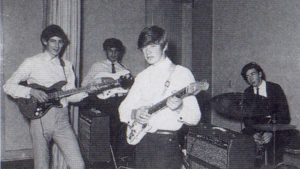 As an artist who has stood the test of time, Borich is undoubtedly one of the chosen few. With a professional career spanning some 50 years, Borich has done it all and has proven to the Universal Music Industry that there is so much more to come from this blues, rock, and funk performer. 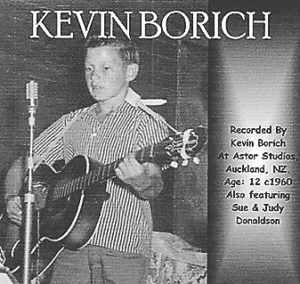 Never one to blow his own trumpet, I’ll break his silence by revealing that Borich has shared a stage with some of the worlds “A- Listed” artists including Carlos Santana, Bo Didley, Richie Blackmore (Deep Purple) Ron Wood ( Rolling Stones), Joe Walsh (The Eagles), John Mayall, ACDC, Taj Mahal & Living Color, also with all line-ups of The Party Boys. In his Trio The Kevin Borich Express, he still delivers a high impact live performance with the same intensity he did back in the 70’s. And mingling with his supporters in the crowd after a performance is all part of the show, selling & signing his CD’s and DVD’s. 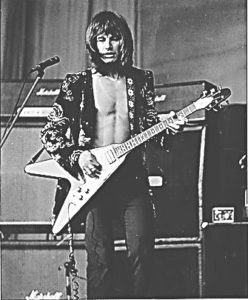 Not even a teenager and Borich is already getting hooked into the energy of music after seeing Black & White movies with Little Richard , fats Domino, Chuck Berry, Bill Haley & Elvis.  They all lit his fuse. Enjoying the melody and sound, he followed the music, and tried to emulate it. Borich kept at it, without even an inkling, that one day he’d become one of Australia’s most celebrated guitar players and songwriters. At 12 years of age, Borich was taken by neighbour Mrs. Donaldson along with her daughters Judy & Sue to record, a private 9 song album, with the girls singing perfect harmony’s on 4 tracks, just because Mrs. Donaldson thought it would be a nice idea. Judy & Sue later had success in New Zealand as “The Chicks”. The acetate recording was found years later and re-mastered into CD format. 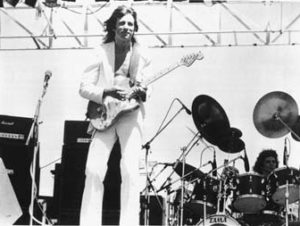 Late 1963, along with two mates from school, Brett Neilsen (drums) and Trevor Wilson (bass guitar) Borich forms the band “The Mergers” initially performing covers of “The Shadows” after school and on the weekends.

Borich:  Aunty Joni got me into the Blues giving me Ray Charles, Muddy Waters, John Lee Hooker & the like records which educated me well beyond what was being played on the radio in those times.

His rise to fame came with the formation of the band the LA- DE- DA’s in New Zealand back in the 60’s & 70’s. With the addition of Phil Key (vocals and rhythm guitar), they recorded their debut single, “Little Girl” and later that year, added Bruce Howard (keyboards). From 1966 – 67, they had five top ten hits in New Zealand. If the band was to grow, they would have to make the move to mainland Australia. So in 1968, the boys moved to Sydney & played live shows to gain a foothold in the music industry until the money ran out, then returned to NZ for a welcome home tour. 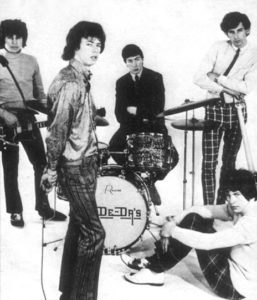 BORICH:  This was the way to do it, and after many ‘welcome and farewell’ tours, we secured a strong enough position in the Australian music scene to enabled us to settle in Sydney and record our first concept album “The Happy Prince” in 1969 with EMI.

BORICH:  As with most groups, line-ups often change, our first being Brett Neilsen.  It was after our first Australian tour, he had decided he’d had enough.  Brian Harris became our drummer for a short time. 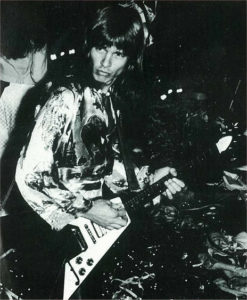 Joining Borich and Keys after Trevor left were Peter Roberts (bass) and then Keith Barber (drums) and together they recorded what was to become a top 10 hit “Gonna See My Baby Tonight” (written and sung by Borich).

The group recorded further singles and albums, however, despite critical acclaim, & a great live reputation they had little chart success, so they disbanded in 1975.

In 1973 Borich who retained the LA-DE-DA’s name, recorded his first 3 piece LP “Rock & Roll Sandwich”, with the help of Ronnie Peel (Bass) and Keith Barber (Drums) – now a classic!

BORICH:  After La De Da, I went on tour for quite a few months with John Paul Young and the Allstars.  Then in 1976, I formed a new band, “Kevin Borich Express”. 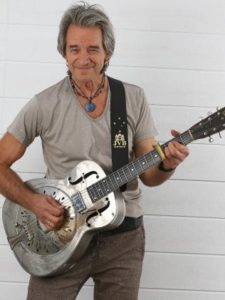 BORICH:  We recorded a track “The end of me” before Brus and Harvey were replaced by Reuben San Fiansco (bass) and John Annas (drums).

They released their debut single “Goin Somewhere” in October, followed by their debut album “Celebration”, Tim Partridge playing Bass on all but one track & live shows.

BORICH:  The album was well received by critics and fans and peaked in the top 30 of the Australian Albums Charts. 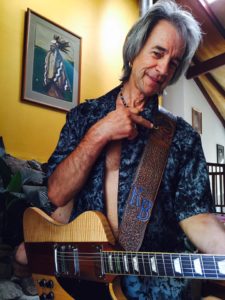 BORICH: There were two shows, the Sydney Show Grounds & Melbourne’s Calder Raceway being huge with 60,000 people.

Carlos Santana was so impressed with Borich, he invited him onto the stage to jam with him. Santana would say of the Australian;

SANTANA:  “He’s amazing. He sounds so much like Jimi Hendrix yet has an individual style. He presents his music honestly and is one of the best guitarists I’ve heard.”

By mid year, Kevin Borich Express released “Kevin Borich Express Live”, with performances taken from Melbourne and Wollongong. Live contains one of the most incendiary and atmospheric versions of “Little Red Rooster” ever recorded along with a number of Borich standards.

BORICH:  I would have preferred the Title “Most Popular Guitarist. ”

BORICH:  Again, there were many changes to the bands line–up as we continued to record songs and albums.

Then in late 1981, Borich was asked to start a cover band as a side project.

BORICH:  It was during negotiations on the phone, I realised the band had no name, then in a light bulb moment I said: call it “The Party Boys”  so we did. 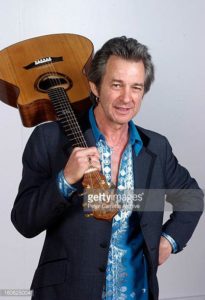 What killed the band in the end was the greed of one person. A bad experience for Borich.

BORICH: “I was totally used & ripped off”.

Borich was asked and appeared in Jimmy Barnes’s band for the 1990 “Two Fires Tour”.

Borich continues his own preferred musical passion performing his original music at Australian and International events in 2011 wooing the audience with his flawless shows featuring long time friend Harry Brus on Bass and his son Lucius Borich on Drums. This lineup released a double CD & DVD under the banner Borich X Borich + Brus “Live At The Basement”, with surprise guests Leo Sayer & Clayton Doley.

Clayton was in the support band and Borich asked him to play on a couple of songs, he was fantastic and as they were going off stage, there’s a encore Brewing;

Borich: Harry said to me”. “Leo wants to get up” – I reply Leo Who??!– “Leo Sayer” says Harry – “Really!!!” – so up comes Leo on stage with a harp in hand for the encore and together we cooked that Basement with a Roof Raising gig & icing on it!! Leo, now a friend, is a wonderful man & musician.

Borich continued to use a spectrum of Australia’s best musician’s at different times including, John Annas returning on drums with Ian Lees on bass guitar to record “Live at the Big Kahuna” in 1996 and a studio album was released in 1998, “Heart Starter”, with Lucius Borich (COG) on “Let There Be Drums” a Sandy Nelson Classic drums and Harry Brus on bass. Kevin Also toured with Lucius & Ben Rosen, recording “One Night Jam Live” at The Continental Club in Melbourne with Special Wonderful Guest’s Wendy Saddington & Ross Wilson, a night to always remember.

Borich has had the pleasure of performing at some of the biggest Rock events Australia has ever seen and has been rewarded with the following:-

The crowds that turn up for Kevin Borich performances are a mixture of generations and attitudes. From your local to the big events, he has carved out a revered reputation in the Australian Music Industry, performing his music with a youthful exuberance, giving extra meaning to the word “Longevity”. Borich’s performance is hailed throughout the music industry as “World Class”.

In recognition of his contribution to Australian music and blues culture, he was inducted into the Australian Blues Foundation Hall of Fame. 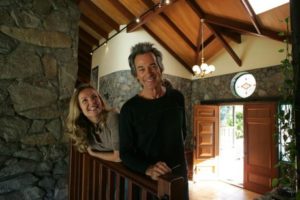 In his private life, he has been married twice and has 6 children. He was diagnosed with Nasopharyngeal squamous cell carcinoma in May 2005. Borich undertook radiation and chemotherapy with a diet change following Ruth Cilento’s book “Choose your own Survival Path” under the guidance of wife Melissa for the cancer.

BORICH:  Sadly, the medical treatment resulted in the loss of my salivary glands and some hearing, & after 7 years all my teeth started falling out – radiation effected. I went through 60 Dives at 14 Fathoms in Hyperbaric Treatments before any dental work was considered.

Borich was a guest on SBS’s National TV RockWiz program in Nov 2008. A great episode playing His Golden hit “Gonna See My Baby Tonight” And The Rolling Stones “Gimmie Shelter”.

BORICH: I was asked again to perform on “RockWiz” on both 26th & 27th of March 2010. The show on the 27th in Toowoomba Queensland was broadcast nationally.

Borich also performed at the ‘Jakarta Blues Festival” on the 15th & 16th of October and 19th in Bali 2010, along with Kara Grainger & a host of International Artists.

And he headlined the “Jimi Hendrix Tribute Concert” at the Sydney Enmore Theatre 27th Nov 2010. 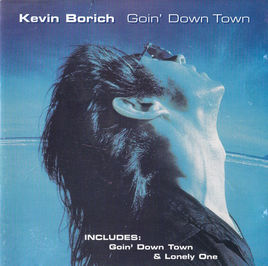 In Late 2012 – Three songs from Kevin’s past have been included on a double CD Package called “BOOGIE” released by Warner’s Music. This CD has everyone who was anyone in the 70’s on it.

Borich: The songs that I feature on are – 1/ Gonna See My Baby 2/ To Pooped To Pop3/ I’m Going Somewhere.

Borich added a 1930’s National Steel acoustic guitar in his show. This “laid-back” acoustic style was a very well received addition to his Shows, providing a mellower base from which to launch later into electric Land, with Fender Strat and Gibson Firebird guitars. 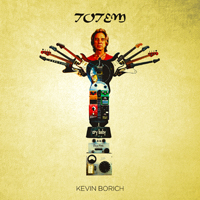 The newest release is a Re Mastered CD version of the LP “Rock & roll sandwich”  his first three piece band back in 1973 – with Keith & Ronnie under The La-De-Da’s name.

Once inspired by the showmanship of our rock’n’rollers of the 50’s & 60’s, the very modest, but extremely gifted guitarist, has transformed himself into one of the most colourful and enduring Australian Blues/Funk/Rock stars of his era. For now, they’ll be no talk of retirement for this Aussie Legend.

For any further information, or bookings of this extremely gifted and talented artist, please peruse his website at

Borich will be travelling from QLD to Melbourne for a one off performance at the “Village Green” Cnr Springvale & Ferntree Gully Rd, Mulgrave, VIC, 3170

Tickets can also be purchased online or at the door after 7.00pm. 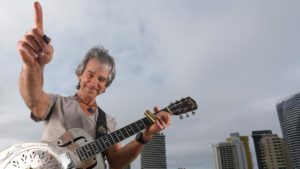