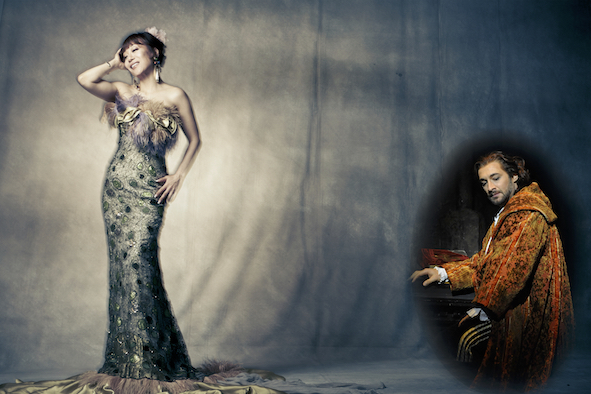 The internationally celebrated Grammy-award winning coloratura soprano Sumi Jo returns to Australia this July for a series of unmissable concerts in Adelaide, Melbourne, Sydney and Brisbane.

One of the world’s greatest exponents of bel canto (beautiful singing), Sumi Jo will perform a magnificent program of music from her unsurpassed repertoire, joined on stage for the first time by dashing Argentine-born baritone José Carbó.

With over 50 recordings to her credit Sumi Jo is the highest selling classical singer in the world, and one of the most sought-after sopranos of her generation. Her concerts have delighted audiences globally, including performances at the Summer and Winter Olympics, and for the Pope. Legendary maestro Herbert von Karajan describes Jo as having ‘a voice from above’.

José Carbó, born in Argentina to Spanish and Italian parents, has become one of Australia’s most popular baritones, touring locally and internationally with Opera Australia, Victorian Opera and Los Angeles Opera since 2005. His debut album My Latin Heart debuted at no.1 in the Limelight Magazine Classical charts.

Sumi Jo and José Carbó will ignite Australian stages with renditions of the most passionate pieces from opera and operetta, as well as tango, and traditional folk song from Jo’s native Korea. Her astonishing vocal technique and purity of tone will be matched by an exquisite wardrobe for a night of operatic glamour.

Andrew McKinnon, who has brought Sumi Jo to Australia for her two most recent tours, said he is delighted that she has accepted his invitation to return for this passionate new concert series.

McKinnon said “I have always loved the art of bel canto and Sumi Jo is one of the greatest interpreters of this thrilling music. I wanted to pair her with the wonderful Australian singer José Carbó to ensure that this will be an unparalleled night of romance which will live long in the memory of all who attend.”

Sumi Jo and José Carbó will be accompanied by one of Australia’s most popular pianists, Guy Noble, who will also conduct the Adelaide Symphony Orchestra.