Remarkably, “Dads Who Care” a facebook group, are organising a March In Melbourne to support the play.  They are getting people to meet at Federation Square on the 21st of September, at 12pm, then after the proceedings they will March to Southbank Boulevard to the steps of the Southbank Theatre.

The motivation for this is the story of one of the play’s characters, and what he represents, a middle aged man known only as 1620. That’s his statistic. We lose up to 8 men a day, 237 a month, meaning 1620 would have tried to take his own life near the end of June. Now his soul is mysteriously stuck in a waiting room reserved for failed suicides, in the afterlife.

1620 does not have a mental illness, so why is he here? This is what the play explores. One of his most powerful lines in the play is:

“I’m a father mate, and in this era, as a father, you have no say. Now you’re just a money earning spectator.”

But is he a victim of social pressures or his own choices? 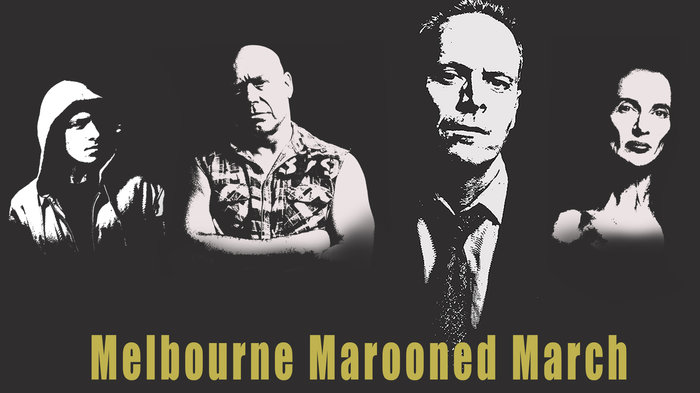 Jaimes on a local Corowa Radio  station talking about Marooned

Through his story and the stories of the two other men in the room the play explores modern day masculinity in the voices of men.

The play has not been sanitized.

The play was conceived after the death of a local actor Guy May, but the catalyst was a local artistic director who stated, you don’t write plays for men, only women buy tickets, men don’t care.

Now The Australian Defence Force has booked two private shows, people, many of them men, are messaging or calling The Wolves from country towns asking us how to bring the play to their town. Which is what we are doing. First stop after The Lawler Theatre and Franskton is Corowa.

But now the man who is bringing Marooned to Corowa, Jaimes Walch, has decided to organise a march to support the play and its themes. So, in a theatrically unprecedented move when it comes to independent Australian theatre this March is happening.