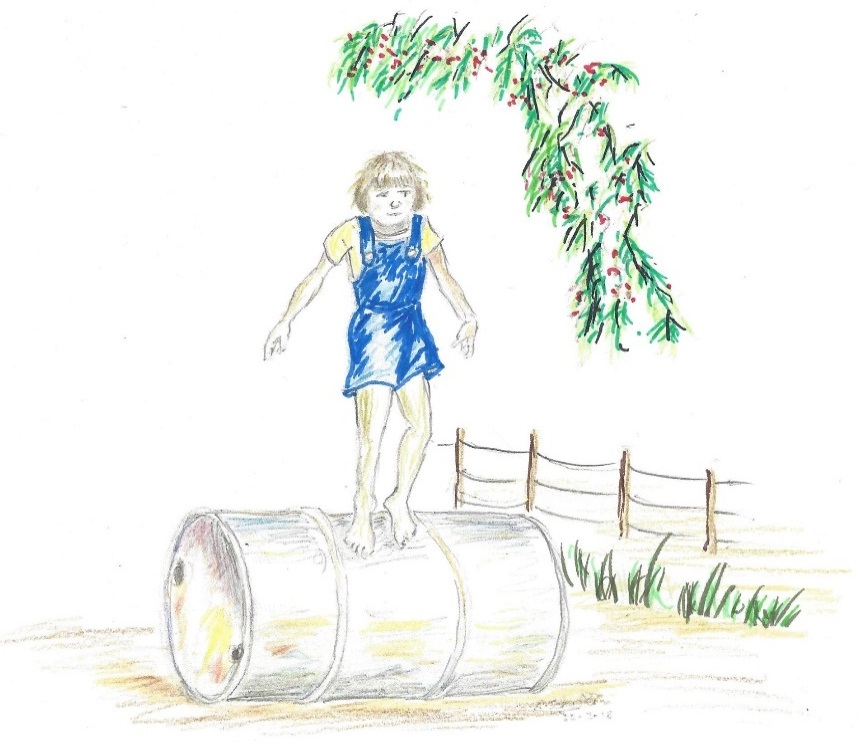 It’s a while since I played cricket. No, I’m not saying how long, but I was the number two batter as well as the number two bowler, and I was definitely the top ranking fielder. That’s probably because I was the only one doing it, unless you counted the dog.

I was nine at the time. My older brother, Jack, not being able to coerce anyone else into joining the team, made do with the talent available, which was me. He set up the pitch in the lane leading from the milking shed. Two empty four gallon tins were used as wickets. A tennis ball was luckily the only weapon available for hurling at an annoying younger sister, which no doubt was some protection for my immature brain. The cricket bat was unfortunately, a full sized one.

Jack made up a few basic rules. We tossed up to see who went in to bat first. He usually seemed to win. I’m not saying he cheated, but it was interesting that he usually picked up the coin before I saw whether it was heads or tails.

Rule one:    The batter stays in until he is caught or bowled out.

Rule three:  Any balls that are hit, are fielded by the bowler.

There seemed to be something wrong with this system, but Jack assured me that rules are rules. As the batter, he hit everything I hurled down at him. In between aiming the ball in his general direction, I then had to retrieve it. This usually meant climbing into the paddock on my left and meandering in between the odd calf, and/or its droppings, or into the chook shed on the right. If he hit a really good one, I would have to climb onto the roof of the latter. If he hit it straight, the ball would soar over my head, I had to race down the lane to retrieve it.

I can’t remember that I ever caught him out. Perhaps that’s why he instigated another rule. When the batsman stays in for a long period, he can then swap with the bowler. This helps develop extra skills. If nothing else, swapping the ball for the bat would provide some light relief. I‘m sure he didn’t really mean to aim it at my head, or thereabouts. That might have occurred because I was shorter than the average batter.

Wherever the ball went, I rarely managed to get the bat near it, as I waved the heavy thing helplessly about. This of course, meant that I was left to chase the ball behind the wicket, hoping it didn’t land up in the engine room of the milking shed. If I did manage to connect bat with ball, Jack was all too ready to catch the feeble attempt.

Jack never did get much practice at fielding, and I never got much practice at batting. I did, however, have some assistance with the fielding. Max, an Alsatian/Kelpie cross, soon got the idea. He would run gleefully after the ball and return to drop the slobbery sphere at my feet. He was much more proficient than me at this game. Everyone needs a handy dog in these sort of situations.

While I definitely did not excel at cricket, I did get some sort of revenge.

My condition for playing his game, was that he had to play mine. There was a handy empty 44 gallon drum lying around. I regularly practiced running forward and backward on it, up and down the lane. When it was Jack’s turn, he would regularly fall of it after a few spins. It was a great leveller. I laughed silently.

With my early cricket experiences, I did not exactly develop a penchant for the game. Then as an adult, I surprised myself. I turned on the car radio, and an Indian voice was commenting. It was Harsha Bogle. He was amazing. In between now and again saying something about the match he was watching, which I ignored, his description of everything else was at the genius level. I could listen to him for hours, even if he was talking about the grass growing.

There is apparently a vacancy for a commentator to cover Australian games. The candidates available were described as boring. Why not get Harsha Bogle over here. I’m sure the Indian Premier League would release him if he was offered enough. A new suggestion has been made – none other than Shane Warne.

Now there’s a unity ticket. Use both of them and I’ll be following the cricket.

But maybe not. It’s switching to pay TV. Someone should throw a ball at whomever thought of that little money spinner, preferably head high.