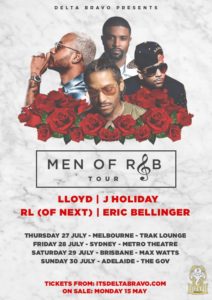 Delta Bravo Presents is excited to announce the inaugural ‘Men of R&B’ tour coming to Australia this July.

‘The Men of R&B’ tour has been curated to celebrate the culture of R&B and will feature a multi generational line up artists of the genre, which is sure to appeal to all lovers of R&B music from the nineties, naughties and today.

The first installment of the tour features hit maker: Lloyd (‘Dedication to My Ex,’ ‘Bedrock,’ ‘Get It Shawty,’ ‘Lay It Down’) touring on the back of his deeply reflective new EP, ‘Tru’’ which was released in late 2016.  Lloyd has been a regular and popular visitor to Australia since 2010 and appears on the ‘Men of R&B’ tour with a brand new show, which will showcase his club hits alongside his melodic ballads performed acoustically.

R&B fans will also be elated with the inclusion of contemporary R&B star: J Holiday (‘Bed,’ ‘Suffocate,’ ‘Guilty Conscience’).  The Grammy nominated artist is known for his outstanding range and ballads and is a sure fire hit with the ladies.  Australian fans will be excited to hear new material from J Holiday, his first since the release of his last album: ‘Guilty Conscience’ in 2014.

Fans will also be pleased to experience one of the most recognisable voices of the genre, singer and songwriter, RL of R&B super group ‘Next.’ As the voice behind some of the biggest R&B anthems of all time in: ‘Too Close,’ ‘Wifey’ and ‘Butta Love,’ RL’s show will also feature some of the hits he has crafted for his contemporaries, none less than Jaheim’s ‘Just In Case.’

Rounding out the line up is prolific R&B singer and songwriter: Eric Bellinger (‘Focused on You,’ ‘I Don’t Want Her,’ ‘Valet’).  The Grammy winning songwriter is keeping the current day R&B flame burning and is the ‘go to’ writer for the likes of: Chris Brown, Usher and Trey Songz.  Eric has recently been performing acoustic shows alongside his club bangers and is sure to impress fans, new and old, with his diversity.

If you are a fan of R&B, then this is a show you do not want to miss. A night of non stop hits and anthems from some of the finest voices the genre has ever produced.