Continuing my journey into the realm of horror fiction, I am thrilled to share my review of Biddy Trott, a fine novella composed by talented author, Donna Maria McCarthy. 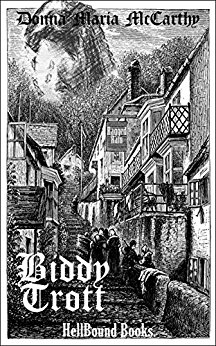 “‘If Biddy knows no rest, then none shall…’ A tragedy born of malice and evil, a tortured body and soul. The townsfolk of Royal Rumney have a conscience, a secret that tears away at their sanity. Any soul shall be offered up in place of the damned; ‘And ever the church bells tell a lie, is Biddy who comes and another will die. Set in eighteenth century England in the small market town of Royal Rumny, Biddy Trott is a Gothic Horror novella with tragedy at its core.

A young girl, falsely blamed for a fire which destroyed the town and killed many, is hunted down, tortured and killed gruesomely, with no conscience. Lord Abner Alexander, a member of the elite and privileged, travels to the town in search of some peace and respite from his very bawdy and raucous lifestyle. The town seems pleasant enough and the people welcoming, although unyielding where their dark and harrowing past is concerned. Amongst some, shame, amongst others a distorted pride. Abner’s first indication that something evil lurks here is on his first night, where the Abbey bells toll two, and he finds himself witness to a terrifying slaying… not knowing whether it a dream or not, he remains, and becomes bewitched by a passion to record any horrors he feels he witnesses.”

The setting of Biddy Trott pre-dates the era of the penny dreadful by about a century, and the astute reader might be forgiven for anticipating an f in the stead of an s in the text. From the perspective of today, the seventeen hundreds are as Gothic a setting that ever was, a time of transition when the first glimmerings of the industrial revolution were being felt, yet most of Britain languished in traditions of yore. Perhaps in essence, Biddy Trott even pre-dates the works of Ann Radcliffe and is more in keeping with Horace Walpole’s The Castle of Otranto, published in 1764. For from the very first sentence the reader is invited into a narrative spun out of the sentiments of mid-eighteenth century England.

Donna Maria McCarthy writes in an old-school style commensurate with the times; the result is a novella that demands of the reader their concentration. Those willing to make the effort will not be disappointed, for the tale is a good one, gripping from first to last. Many will be forgiven for beginning the work again, to pick up on the nuances. The narrator inhabits Royal Rumny and compels the reader to do the same and with such intensity, it is as though the author, in conjuring the narrative voice, has cast a spell, for the story itself is a haunting.

Biddy Trott is filled with grotesque characters, maimed and crippled, haunted and possessed, and downright evil. Even during the day, there is no sense of light. The action is gruesome, bawdy at times, and sharply witty. A compelling read, fast-paced despite the language, and filled with twists and turns; the reader rendered as confused as the protagonist, compelled to discover the horrible truth that curses Royal Rumny.

The young girl at the root of the darkness, Biddy Trott, is much more than a mere character in this novella, she embodies a theme, she is the vessel for a concept, one born of the author’s incredible insight and rich imagination. To say more would be to spoil the story.

Biddy Trott will appeal to fans of Gothic literature, for those who want to read their horror stories more than once, and for collectors of rare finds. I, for one, am looking forward with keen interest for more from this author.