The Leadbeater’s possum finally had its day in court. It may change the future of logging in Australia

The Federal Court last week ruled that VicForests – a timber company owned by the Victorian government – breached environmental laws when they razed the habitat of the critically endangered Leadbeater’s possum and the vulnerable greater glider.

Under so-called “regional forest agreements”, a number of logging operations around Australia are exempt from federal environment laws. This effectively puts logging interests above those of threatened species. The court ruling narrows these exemptions and provides an opportunity to create stronger forestry laws.

Since 1971, the Leadbeater’s possum has been the faunal emblem of Victoria. But only about 1,200 adults are left in the wild, almost exclusively in the Central Highlands region.

Official conservation advice identifies the greatest threat to the species as habitat loss and fragmentation caused by the collapse of hollow-bearing trees, wildfire, logging and climate change.

But thanks to exemptions under regional forest agreements, logging has continued in the Central Highlands – even in the aftermath of this summer’s devastating bushfires.

So what are regional forest agreements?

Regional forest agreements were designed as a response to the so-called “forest wars” of the 1980s and 1990s.

In 1995, after logging trucks blockaded parliament, then Prime Minister Paul Keating offered a deal to the states: the federal government would accredit state forest management systems, and in return federal law would no longer apply to logging operations. Drawing up regional forest agreements between state and federal governments achieved this.

Between 1997 and 2001, ten different agreements were signed, covering logging regions in Victoria, New South Wales, Tasmania and Western Australia. These agreements were for 20 years, which means many have now either expired and been renewed or extended, or are about to expire.

The agreements are supposed to satisfy a number of conditions. This includes that they’re based on an assessment of environmental and social values of forest areas. They should also provide for the ecologically sustainable management and use of forested areas, and the long-term stability of forest and forest industries. 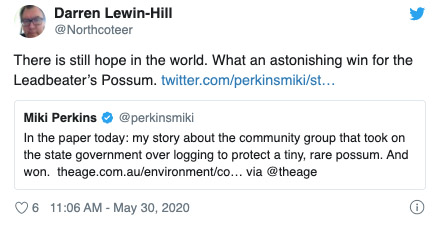 But conservation experts argue the agreements have failed both to deliver certainty to forestry operations or to protect environmental values and ensure the conservation of biodiversity.

History of the court case

The legal proceedings against VicForests were initiated in 2017 by Friends of the Leadbeater’s Possum, a small community group which relied on crowd funding to cover legal costs.

Initially, the group argued Victoria’s failure to undertake a required review of the Central Highlands regional forest agreements every five years meant the usual exemption to federal environment laws should not apply.

But in early 2018, Justice Mortimer ruled against this. But she also rejected VicForests’ arguments that any operation in an area covered by a regional forest agreement is automatically exempt from federal law.

She ruled that the logging operations will only be exempt from federal law if they comply with Victoria’s accredited system of forest management. This includes the requirements for threatened species, as specified in official action and management plans. 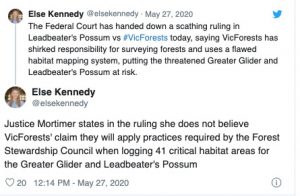 In response to this ruling, Friends of the Leadbeater’s Possum reformulated their claim.

They argued logging operations in 66 coupes (small areas of forest harvested in one operation) didn’t meet these requirements for threatened species, and so the exemption from federal laws didn’t apply.

In her ruling last week, the judge found VicForests unlawfully logged 26 coupes home to the Leadbeater’s possum and greater glider, and that logging a scheduled 41 other sections would put them at risk. 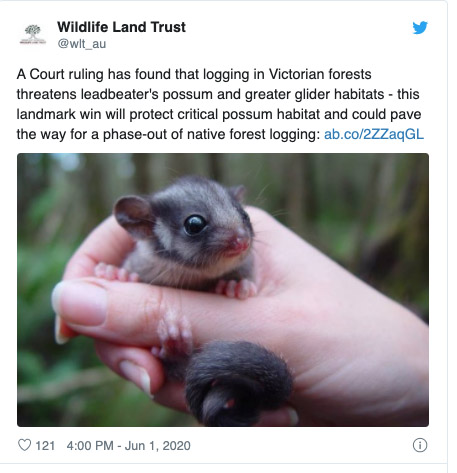 The court found the company breached a number of aspects of the Code of Practice for Timber Production 2014. This code is part of the Victorian regulatory system accredited by the regional forest agreement.

In particular, VicForests had not, as required, applied the “precautionary principle” in planning and conducting logging operations in coupes containing the greater glider.

Read more: Logging is due to start in fire-ravaged forests this week. It’s the last thing our wildlife needs

Nor had VicForests developed a comprehensive forest survey system, or engaged in a careful evaluation of management options to avoid dangers to these threatened species.

These failures meant the logging operations were not covered by the exemption from federal laws. As such, the court found VicForests had breached federal environmental law, as the logging operation had, or were likely to have, a significant impact on the two threatened species.

This case will have clear implications for logging operations governed by regional forest agreements.

In fact, the timber industry has called for state and federal governments to urgently respond to the case, and clarify the future of regional forest agreements.

In any case, the result is the perfect opportunity for state and federal governments to rethink forest management. That means properly taking into account the ongoing threats to threatened species from climate change, wildfires and habitat loss. 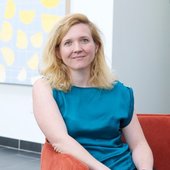 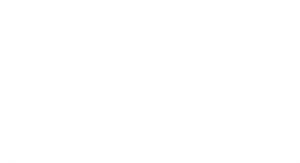