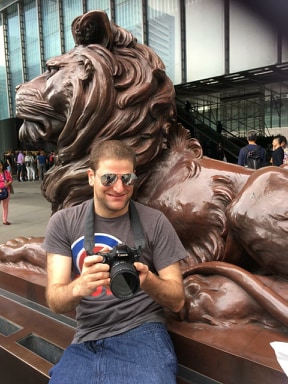 Professional photographer and videographer Aaron Michelson has seen a lot of the world but considers his birthplace of Hong Kong to be his home.

The 30-year-old holds a US passport thanks to his parents and spent time in the United States every summer or winter when younger.

He also holds a Hong Kong ID and is a permanent resident there, and has visited Australia, China, Thailand, Cambodia, Vietnam, Singapore, Indonesia, Morocco, Spain, Italy, England and Japan.

“I feel more at home in Hong Kong,” he says.

“It’s where I grew up. When you live in Hong Kong for a while, it just becomes a part of you. Everything is comfortable here – the transportation is great and safe, and people are friendly here. You make a lot of friends.”

“I was taking a film class, I was watching a lot of films in class and I became interested in the making of it – what stuff means and the art of it, and I decided to make my own.”

He had previously photographed school trips away, such as the Tibetan border, and film seemed a natural progression. That progression continued when he moved to Boca Raton, Florida, to study Film and Communications at Lynn University.

“It was nice being near the beach. It was sort of the same climate as in Hong Kong, a bit cooler in winter and then they get rainy season, or what they call hurricane season. I’d much rather be here during a big storm because Hong Kong is more prepared for storms than the US.”

At Lynn, he got to study film and film history in depth, make and edit films, and be involved in tv production and broadcasting, while developing his own style.

Returning home to Hong Kong from the US, Aaron started getting photography and videography commissions, documenting bar mitzvahs and bat mitzvahs (the Jewish coming of age ceremonies), corporate events, family and private parties. He also collaborates with local theatre productions for photography and videography, and is building a portfolio of portraits and personal photoshoots.

As for where in the world he would most like to go, he chose Aotearoa/New Zealand.

“I have never been there before and, from what I see in pictures, it’s a very beautiful place. Plus, I have friends I want to visit.

We cannot display this gallery