Acclaimed British theoretical physicist, cosmologist and author Stephen Hawking has died aged 76. Hawking is best known for his work on black holes, which revolutionised our understanding of the universe.

Hawking passed away today peacefully at his home in Cambridge, his family confirmed in a statement:

We are deeply saddened that our beloved father passed away today. He was a great scientist and an extraordinary man whose work and legacy will live on for many years.

His courage and persistence with his brilliance and humour inspired people across the world. He once said, “It would not be much of a universe if it wasn’t home to the people you love.” We will miss him forever.

Hawking was born on January 8, 1942, in Oxford, England. In 1963 he was diagnosed with ALS, a form of Motor Neurone Disease, and later confined to a wheelchair and forced to communicate via a computerised voice. But he continued his theoretical work and was outspoken on many things over much of his life.

Tributes have been pouring in on social media for the scientist, who made complex science accessible to everyone in his 1988 bestselling book A Brief History of Time.

Among those early to pay tribute were the American astrophysicist Neil deGrasse Tyson and NASA. 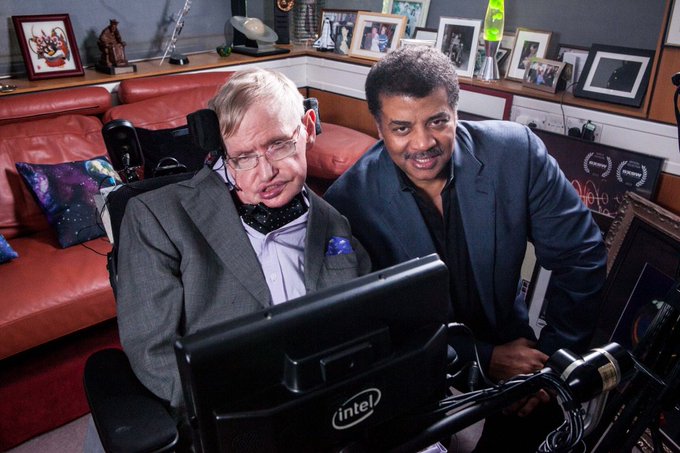 His passing has left an intellectual vacuum in his wake. But it’s not empty. Think of it as a kind of vacuum energy permeating the fabric of spacetime that defies measure. Stephen Hawking, RIP 1942-2018.

262K people are talking about this 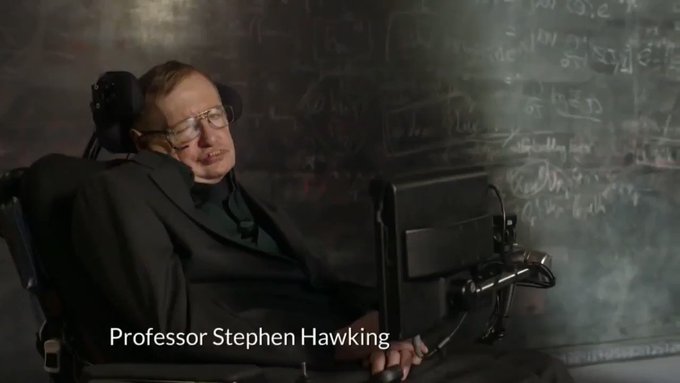 Remembering Stephen Hawking, a renowned physicist and ambassador of science. His theories unlocked a universe of possibilities that we & the world are exploring. May you keep flying like superman in microgravity, as you said to astronauts on @Space_Station in 2014

Others to pay tribute include Microsoft CEO Satya Nadella and the Prime Minister of India, Narendra Modi.

Professor Stephen Hawking was an outstanding scientist and academic. His grit and tenacity inspired people all over the world. His demise is anguishing. Professor Hawking’s pioneering work made our world a better place. May his soul rest in peace.

Hawking’s acclaimed book, A Brief History of Time, was made into a documentary in 1991, directed by Errol Morris, who also paid tribute.

It had to happen, eventually. We were lucky to have him for so long, and I was lucky to be able to work with him. A truly fabulous human being. Stephen Hawking. Funny, perverse, and, of course, brilliant.

There have been reactions too from the world of Astronomy in Australia.

Professor Stephen Hawking was an inspiration to me to become not just a scientist but a communicator of that science.

His work as a cosmologist, and discoveries in black hole physics were legendary. His best-known prediction, named by the community as Hawking Radiation, transformed black holes from inescapable gravitational prisons into objects that instead shrink and fade away over time.

His writings were inspirational to many scientists and enriched the lives of millions with the latest science and cosmic perspectives. He was also wonderfully funny with a fantastic media savviness that propelled him into A-list celebrity stardom as few other scientists before.

Through it all, of course, his illness made his achievements near-superhuman. How he manipulated Einstein’s equations in his mind when he could no longer hold a pen I can’t even begin to imagine.

While his many contributions will live on there is no doubt that science and the wider world is the poorer for his passing.

I think Stephen Hawking’s biggest achievement was getting people talking and interested in some very complex and challenging ideas about the universe and our place in it.

I remember the fuss when his book A Brief History of Time came out, and how it became such a big deal in the UK. It was amazing how widely read and discussed it was, particularly given its content (stuff that is usually portrayed as being really difficult and/or boring).

It was a fantastic example of how even the most complex and challenging ideas can capture the imagination, when they’re explained in the right way. Above and beyond the great research he did, his impact as a communicator was fantastic.

He definitely did a lot to bring those kind of concepts into the mainstream, and doubtless inspired a whole new generation of cosmologists and astronomers. That is probably the best legacy any scientist could ask for!

Stephen Hawking was undoubtedly an intellectual giant, making leaps of reasoning that sometimes led to startling insights into the nature of the physical world. His finding that black holes slowly dissolve will probably be his greatest scientific legacy.

But he was much more than a skilled cosmologist. His greatest impact came from taking the time to carefully explain his theories to the public, engaging millions with his bestselling books.

As a 15-year-old, his most successful book A Brief History of Time had me captivated with relativity and quantum theory. This is the true strength of his legacy.

Like many of the great theorists, Stephen Hawking had the ability to use very simple thought experiments to make predictions about the behaviour of the universe.

My favourite was his insight into evaporating black holes, which combined general relativity and quantum mechanics.

His ability to remain engaged with the scientific community despite his physical condition was a testament to his rare talent.

Hawking also recognised the enormous potential of the universe to be teeming with life and the advances in technology that might permit its detection in the near future. Hence his support for Breakthrough Listen, the search for alien life in the Universe.

As an astrophysicist who has spent a significant fraction of my career working on the observational aspects of black holes using radio telescopes, and hoping to continue that with the billion dollar Square Kilometre Array over the next decade, Stephen Hawking’s work to understand the physics of black holes is close to my heart.

His mathematical and physical insights into black holes have been astonishing, which at some level synthesised general relativity and quantum mechanics.

Hawking’s work has inspired deep questions in physics and astrophysics, which has had a bearing on plans to build telescopes to explore the Universe, including the Square Kilometre Array in Australia.

There are few scientists who reach as far into popular culture as Stephen Hawking did. His research tackled the biggest of big questions – the nature of time, space and the universe we live in.

Sometimes it feels like science is losing ground in the modern world, but people still look to the stars for answers about who we are and how we come to be here.

Hawking’s bestselling A Brief History of Time made cosmology accessible to people and brought black holes out of the shadows and into the public imagination.

Personally I’ll miss his appearances on The Big Bang Theory, where he could out-nerd the nerds, and also provide some often necessary common sense. It was always great to see a world-class scientist just having fun.

This tribute was compiled and written by: