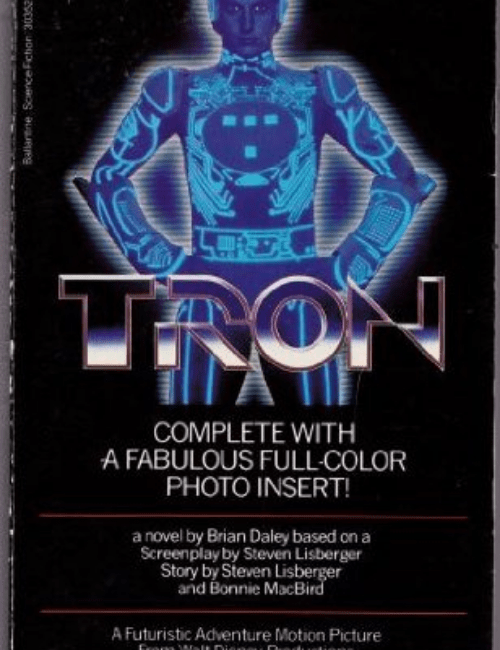 This is the novelisation of the Screenplay written by Steven Lisberger. The movie was first released in 1982. I’m not sure why I haven’t seen the movie, possibly because the people I was seeing movies with at that stage didn’t like science fiction. And this is straight science fiction. Not a lot of romance, thank heavens, but that means my movie-going friends of that time would have been unwilling. And in those days computers were still really new. My Dad bought the Sinclair ZX80 in 1980, and there were some better personal computers starting to be available for reasonable prices in the following years. But I was one of the few interested in computers among my friends. In 1983 I actually had a job as a Computer Operator, a position that would now be called data entry or administrative assistant.

I only digress a little. This short book is the novelisation of the screenplay of Tron, the movie. This copy is one of those books I bought some years ago in order to sell. For my new readers, I was attempting to make a business buying and selling books. Not something I’m good at, but I did try. In 2009 a business coach was very firm in telling me a blog would be a good thing for my business. It was great for me but very bad for my business, the writing took over and the business went by-byes. But this book remained, it has my sticker inside and that’s another story.

This book shows games, computer games from within the computer. Real people become pawns of a computer program. The Master Control Program was originally a chess program and was busy taking over the computer, and from there, the world. The movie was very modern in its day.

Why am I saying it’s science fiction when computers were on the horizon? There’s a couple of reasons. The first is because many people hadn’t even seen a computer. When I was in year 11 in 1980 our school purchased their first computers for teaching purposes. I wasn’t allowed inside that room as I was considered too old to learn. Too old to learn about computers, yep, I’ll show ’em… And when I had my computer operator job in 1983 they also had a manual typewriter. When the typist resigned I moved between her job typing letters on the manual typewriter and my job doing data entry on the computer. Playing games on computers was still very much in its infancy, at least, in Australia. I know these things were more common in the US where this film (and book) were made, but I didn’t visit there until many years later.

But the biggest reason for me is that they were looking at digitising objects with the idea of moving them from one place to another. And that was far enough advanced in this book that a man was able to be digitised and taken inside the computer. This is something that was commonplace in Star Trek, I mean, we’ve all the heard the words ‘Beam me up, Scotty’…and wished we could say them and have them come true. But this is something that’s really only coming into reality in the last few years. I’ve had this book on my shelf for longer than scientists have been able to beam an orange from point a to point b.

I thoroughly enjoyed this book. I was reading Labyrinths by Jorge Luis Borges before this, I put that book down because I realised my eyes were glazing over and the words weren’t even making it past my eyes. Instead I picked up Tron and read it fairly quickly. I found the descriptions of the programs moving around and fighting as gladiators within the computer to be compelling. Apart from the romance, there is little that I didn’t like. The biggest thing I didn’t like about it is that I haven’t seen the movie, and that’s not the book’s fault. When I’ve watched the movie I’ll probably reread this book so I can see it with fresh eyes. What I really want is the light-cycle, I love how it moves. Ignore the fact that I’d probably fall off as my first movement, they sound fabulous.