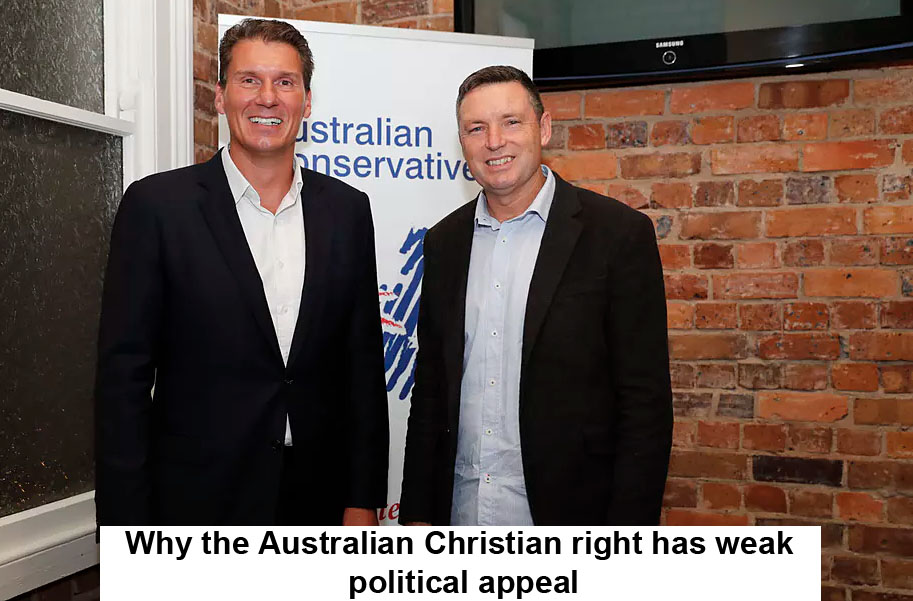 The Christian right has been a forceful presence in American political life since the 1970s. Conservative Christians in Australia have attempted to mobilise religion in similar ways, but have not been able to gain a permanent foothold in our mainstream political culture.

Religion is never just religion; it can mean at least three different things. First, propositions about the world: Does God exist? Is Jesus his son? Second, an expression of shared identity: “we are Christians/Muslims/Jews”. A third approach understands religion as a “technology of self-governance”. That is, we reflect on our conduct and thoughts and try to live according to a moral code.

In the lives of the politically religious, these concepts are entangled. Australian political religion began as an expression of identity, but today draws much of its appeal on notions of self-governance. Yet this appeal has limited political potential.

For the first half of the 20th century, religious identity was a major faultline in Australian politics: Protestants tended to support conservative parties; Catholics generally favoured Labor.

Popular Protestantism emerged as a technology of self-governance associated with crusades for moral reform. Among Catholics, disproportionately less educated, religion was still understood as a form of group identity rather than a way of living. Australia, like other countries of European settlement, saw an alliance between Catholics and the left, despite the illiberalism of the Catholic hierarchy.

It was only in the 1930s that a new generation of Catholics (exemplified by B.A. Santamaria) adopted the style and rhetoric of Protestant politics. Santamaria called on Catholics to live their faith and let it specifically shape public policy.

A new generation of educated Catholics was enthralled. They defied the Labor and Catholic establishment to form the Democratic Labor Party (DLP) after the 1955 Labor Party split.

This period represents the high point of Australian political religion. The DLP was a distinctively religious party, overwhelmingly supported by Catholics, while the suburban Protestantism of Sunday schools and Freemasonry shaped Liberal politics.

Yet, the edifice of old Australian political religion began to dissolve in the 1960s. Social upheavals undercut the power of religion as a set of unchallenged norms. For some, modern liberalism provided an effective substitute. For others, it offered only social disintegration and meaninglessness.

Established churches acquiesced in the rebellion against the old morality. Catholic certainties were shattered by the liberal reforms of Vatican II. Protestant certainties of sin and damnation seemed absurd in the age of post-ideological prosperity, and Protestant church attendance fell rapidly.

For a time, the DLP defied the trend, but it’s very cohesion as an anti-Labor force undercut its own rationale. After the DLP’s electoral collapse in the mid-1970s, it was logical for sympathisers (such as Tony Abbott and Kevin Andrews) to transition to the Liberal Party. For these Liberals, Catholicism was a faith of group identity, persecution fears and clerical heroes (such as, in more recent times, George Pell).

Rise of the evangelical Christian right

But at the very time that political religion seemed doomed, it began to revive. Religious conservatives fought back and activated previously passive church membership in defence of traditional morality. In the United States, the 1970s was the decade of faith. Australia provided only a faint echo, but for ambitious evangelicals, the American Christian right was a model.

Fred Nile’s Call to Australia (later renamed the Christian Democratic Party) polled 9% at the 1981 New South Wales state election. Political religion offered a new way for its voters to have lives of self-fulfilment and purpose, lifting them from the suburban routines of empty churches to participation in a wider world.

Evangelical Christians pushed into politics even more explicitly in the 2000s. In 2001, the obscure Australian Christian Coalition rebadged itself as the Australian Christian Lobby and rapidly developed a high profile, as it sought to bring a Christian influence to politics. In 2002, former Assemblies of God pastor Andrew Evans established the political party Family First, and was elected to the South Australian upper house.

At the 2004 federal election, this kind of politics burst onto the national stage with the election of a Family First senator from Victoria and the Hillsong-affiliated Liberal Louise Markus in the western Sydney seat of Greenway. Markus’s Muslim opponent, Labor’s Ed Husic, believed religion was used against him during the campaign.

In May 2004, the Howard government legislated to prevent same-sex couples from marrying, and by the end of the year, the devout Christian George W. Bush had been re-elected to the US presidency. Secular liberals feared the worst about the increasing political influence of the Christian right.

This fact underlay the failure of the religious right in the 2017 same-sex marriage debate. The driving force of opposition was a belief that religion made truth claims: a moral law that homosexuality was wrong. Yet even in the United States, younger evangelicals have become more sympathetic to same-sex marriage. The project of marriage equality with its emphasis on authenticity within limits is compatible with evangelical religion.

Yet the response to this failure on the religious right has been to pursue new “truths”, such as the natural rights economic liberalism of Cory Bernardi’s Australian Conservatives, which absorbed Family First last year.

This position contradicted the economic centrism of many Family First voters and probably contributed to the Conservatives’ electoral failure at the recent SA state election.

The Australian Christian right never managed to scale the heights of its American counterpart, but it has still fallen a long way. Its rare and fleeting political successes are but fond memories for its adherents, even as evangelical faith continues to shape the lives of many outside politics. 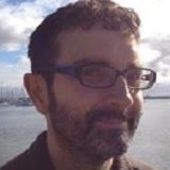