‘Osho Lou’ was in town for a series of colonic irrigation sessions .
For those not acquainted with Osho, they are a reincarnation of the Rajneesh sect.
The orange cloth wearing disciples of Bhagwan Shree Rajneesh who made media waves during the 1980s. They endured a PR nightmare period when attempted murder, embezzlement, bio terror food contamination alongside poisonings of government officials where just a few of the shenanigans the Bhagwan’s inner circle got up to.
All this was going on as he blithely amassed a collection of 90 odd Rolls Royces in between bouts of karmic transcendence and self imposed hibernation. The media circus hoopla culminating in an infamous 60 Minutes interview where the sect’s then secretary Sheela lashed out with an acidic tirade which produced the memorable line-
“ Well Tough Titties.”
So they decided to have a Re Branding- a leaner, cleaner, catchier name.
A bit like the KFC makeover.
They call themselves Osho these days. 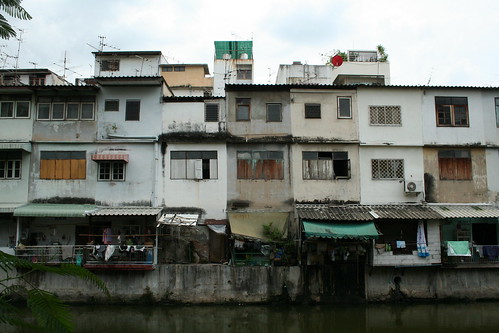 Anyhow, I met Lou in a vegetarian restaurant in Bangkok. He was on his way back home to Northern NSW. The Oshos have a significant presence in and around Byron Bay.
He decided to have a hydrotherapy treatment stopover after his annual visit to the Osho Ashram in Pune India. It’s far cheaper to get a hose shoved up your arse in Bangkok in comparison to Byron, Lou informed me as he eye balled me with a beaming smile.
One of those idiotic smiles that can be easily confused for being in the presence of an enlightened soul or alternatively just a gay come on signal.
We made a little small talk about the pros and cons of a strict vegetarian diet coupled with regular colonic irrigation treatments and soon parted company. Later that evening I was surprised to see him at Bangkok’s 13th Blues Bar…. Spiritual Osho devotees and Blues Bar Boozers are incongruous bedfellows at the best of times.
So my ears pricked when I over heard Lou trying to get friendly with a Scandinavian bloke waiting his turn to enter the bar’s only toilet ,
“I bet you’ve got big balls ?”
The Scandinavian visibly taken aback mumbled some gibberish akin to what The Swedish Chef on The Muppets Show was renown for- “errrrh aaahh I donnntt……….”
Undeterred Lou followed up with , “ Come on now, don’t be bashful.”
While the Oshos were caught up in all sorts of scandal, there weren’t any Sex Scandals to bury in the closet. One of the central edicts of The Rajneeshs was full physical-sexual expression and shedding all forms of emotional and sexual repression. Their dynamic meditation methods are a far cry from the passivity of the Pardon Me Father For I Have Sinned of a Catholic’s confessional box. Who knows, the Osho hierarchy just might get a call from The Vatican to help them sort out imminent re branding issues of their own, especially if the church’s woes of recent years relentlessly persist.
How can the Church best deal with The Enema Within !