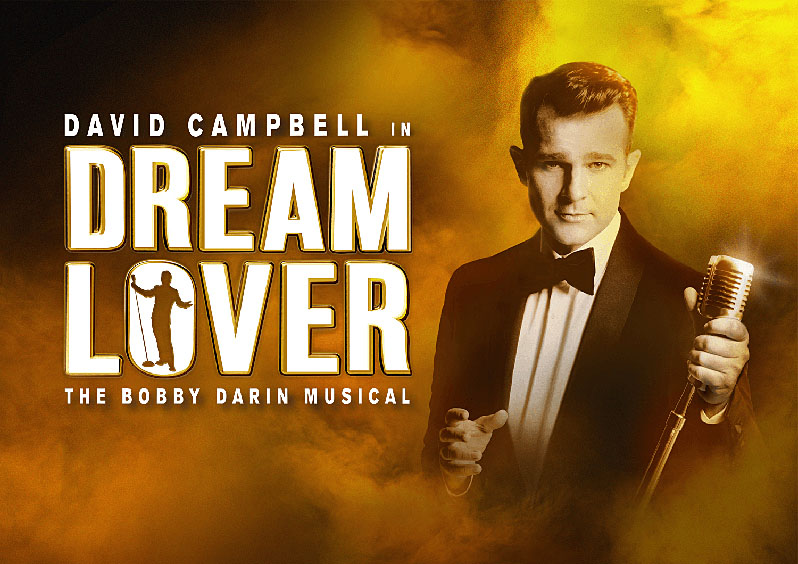 Last Thursday night my wife and I attended the evening performance of “Dream Lover – The Bobby Darin Musical” performed at the Melbourne Arts Centre.

Also performing is Hannah Fredericksen in the role of Sandra Dee, Darin’s wife – Arole. This is a role she is absolutely perfect for and we loved her. In fact the casting in general is most excellent.

We have Marney McQueen and Martin Crewes in the roles of Nina (Darin’s sister) and Steve Blauner, Darin’s oldest friend, biggest fan and longtime manager.

While the song Dream Lover plays a pivotal place in the performance, the show covers so much of Darin’s recorded material, material he sang and material he wrote that others sang.

It really is an intimate and epic story of an all-round entertainer adored by his fans. For those who were not around in the period that the musical covers,  Bobby Darin, together with his movie star wife Sandra Dee, provided the iconic soundtrack to a generation.

The musical captures the glamour and passion of the big band era, the Rat Pack in Vegas and the Golden Age of Hollywood, a time of trail-blazing stars, knock-out fashions and life-changing events.

In fact it is almost worth the price of the ticket to watch and listen to the amazing 18-piece “big band” assembled for this show. The horn section is an utter delight and overall it reminds us just how brilliant and powerfully emotional is the music generated by a live and highly talented big band is.

Based on an original concept and stage play by Frank Howson and John-Michael Howson, and adapted for the stage by Frank Howson with Simon Phillips and Carolyn Burns, the show includes 34 great hits from the 50s and 60s.

Frank Howson spent a lot of time with Darin’s family in the USA getting his story first hand, and it shows.  The complexity of his story, such as Bobby Darin’s mother actually being his grandmother and his sister actually being his mother, his presented in a clear to understand manner and yet, in a way that surprises us. Howson has provided us with an accurate storyline that is full of surprises.

So what is my conclusion?  Dream Lover is an extraordinary production. The quality of the individual performances are excellent. The renditions of the songs are simply wonderful, and the performances by the actors deserved the standing applause they got.

The lighting and the sound production support the performance in the manner in which it deserves. We relive the music and the triumphs and tragedies of this man born as Walden Robert Cassotto – the man who we came to know as, Bobby Darin.

On Friday January 5th, Frank Howson announced that the show had broken all box office records at the Arts centre for pre-show sales.

Miss this show and it’s your your own loss.

Tickets can be ordered by clicking on this icon –