Listen To Older Voices presents the stories, views and opinions of our older citizens. It is predominantly in a life & times format, with interviewees reflecting upon their lives from earliest memories. An underlying principle of the program is to promote the concept of positive ageing, reinforcing the principle that older people have & continue to make a valuable contribution to both their local & wider community.

This is part 2 of a 3-part program featuring the story of 70 year old Simon Alsop. The stories come thick and fast and despite Simon having suffered a stroke, we have no difficulty in following his story. He talks at some length about his feelings over our involvement in the Vietnam war, which as someone who was eligible to be called up in the birthday ballot, he had been forced to decide his position and he decided to take a stand. In the end, he joined the Naval Reserves which exempted him from the ballot.

Simon also expresses some powerful views on the treatment of Indigenous Australians as well as migrants coming into this country and he is sure to find many sympathetic listeners as he shares his thoughts. However, his story is not all serious as he also shares his tale of his amazing bus trip as a young man from Katmandu, through the Middle East to England. It is also when he shares the story of how his life changed when he became a victim to a stroke and how he has coped all of which is most touching and educational. 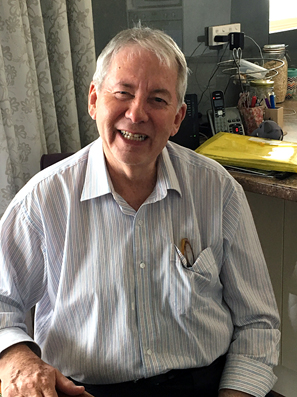 Previous LTOV Programs can be accessed clicking on this icon –