Cream Of The Crate #7: Various Artists – Live At The Station Hotel 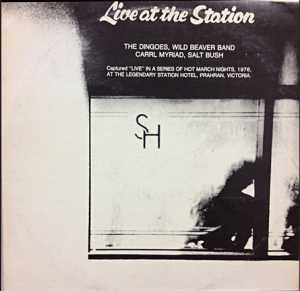 This review was originally posted on the first Toorak Times web site which was abandoned for its current site in March 2017. The old site will be permanently closed in 2020 and these reviews are being re-published in order to preserve them on the current Toorak Times/Tagg site.

From the Cream of The Crate Series – An album in my collection that is irreplaceable, and simply a classic!

You could be forgiven (except for the photo above) of asking, which album is he talking about? There may be more I don’t know about, but at last count there were five recordings all “Live At The Station Hotel”. Before examining the one I believe is the ‘Cream of the Crop”, let me list the one’s I have identified in order of their recording.

1. Ariel – Live At The Station Hotel: Made at the Station Hotel, Prahran on 11 November, 1975 — the night of the dismissal of the Whitlam government — the tape includes a live rendition of a suite of songs from The Jellabad Mutant, and it showcases what a polished and dynamic live outfit Ariel Mk III really was.

3. Live At The Station Hotel: by Flickers Over There in March 1988, released as a digital download (initially released 31 march 1988).

4. Live At The Station Hotel: Dutch Tilders and The Blues Club, a classic album recorded in 1993.

5. Live At The Station Hotel: The Final Gig, recorded 22nd October 2011. This is a recording of the final show at the Station Hotel, featuring, Barry Charles, Winchester, the Mick Elliott Band, the Pardoners and, Spectrum (With a poem by Robert Lloyd). This was a limited edition release on CD.

It is release # 2 (the 1976 release) that I believe is the “Live At The Station Hotel” that best captures the spirit and the music played there. It features some of what was then, Melbourne’s best bands.

Having said that, there were many fabulous groups that played there but were not at the recording gig.

This album only features four of all the great artists to have played there. In order as they appear on the album:

The Ballad of the Station Hotel

It is arguably one of the great Aussie compilation albums of the 1970’s.

This album features an amazing collection of styles via these four groups and now, some 43 years later, we can recognise that many of these artists have gone on to become true legends of the Oz music scene!

I have included one track from each of them at the end of the article. I chose the track that is in in my opinion, the best from each group. Having said that, there is not a ‘dead’ track on this fantastic album.

If you have not been fortunate enough to hear this album, then you will need to take my word for the fact that the atmosphere and crowds at the Station Hotel have driven these groups to play at their very best.

Yet, there is more. Behind the scenes there were some now ‘legendary’ names of the Melbourne music scene at work.

Produced by Keith Glass, himself a musician and singer of note having been a significant member of the 18th Century Quartet and Cam-pact. Keith also sang a lead role in the Australian production of Hair.

Another man to have played a key part in this album coming to being, was David N. Pepperell (aka Doctor Pepper). David was originally the lead singer of the short lived Melbourne Group of the 60’s – The Union (notable for their recording of the Thump, a track acknowledging the Thumping Tum disco). David also remembered for his music Journalism.

Keith is credited as Producing this Album, and David as the “Drunken Producer” (or vice versa).

The third key man associated with both the production of the album, and credited with being the first promoter of the Station Hotel was Mark Barnes.

Mark was also a member of several Melbourne based bands, the best known being member of Cam- pact. Mark was also notorious in his own right in his role as promoter at the Station from its inception through to several years

The cover and notes reflect the quirks and skills of these three guys and along with John McDiarmid & Michael Shipley, who engineered the recording.

What we have been left with an absolute Classic Australian Recording!

Live At The Station Hotel was originally released on the Lamington label, my copy is the reissue on the Missing Links label (owned by Keith Glass).

, and the tracks are:

If you do not own this album, but are ever lucky enough to find it, do not hesitate to buy. This is already a highly desirable album and its desirability will continue to grow as the legends of these artists, their music and the Station Hotel, continue to grow with the years.

Previous Cream of The Crate Albums:

Previous articleGeorge Pell has lost his appeal. What did the court decide and what happens now?
Next article5 Mistakes To Avoid When You Go For Workwear Shop Online