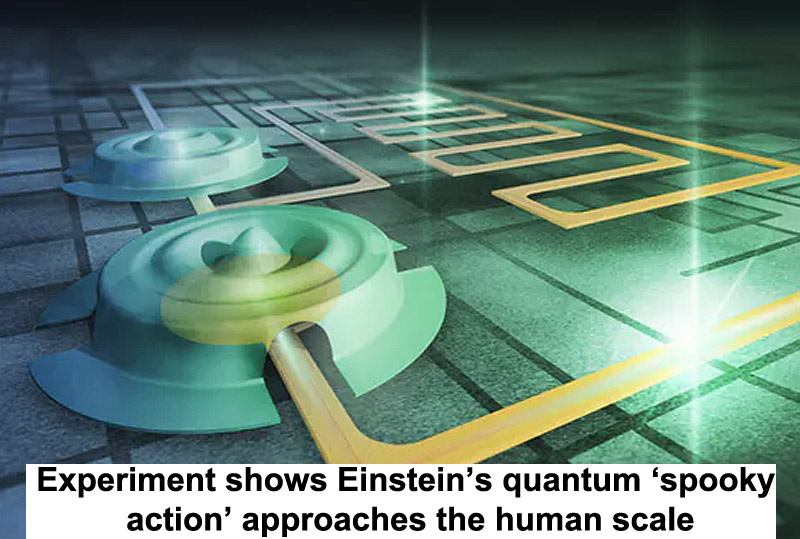 Quantum physics is often defined as the physics of the very small – think atoms, electrons and photons.

But we have managed to demonstrate one of the quirky features of quantum physics at a much larger scale. In a paper published yesterday in Nature, we describe how we were able to create quantum entanglement of the motion of objects composed of many billions of atoms.

Entanglement is where two objects that may be separated by an arbitrary distance are somehow connected: a measurement on one object leads to a change in the results of measurements made on the other – what Albert Einstein called “spooky action at a distance”.

Entanglement has been demonstrated for microscopic-scale systems, such as those involving photons, ions and electron spins. But a number of challenges remained before we could demonstrate entanglement on a larger scale.

Before I look at how we solved some of those challenges we need to understand a bit more about quantum physics.

The size of things

Does size really matter in quantum physics? Well, kind of. There is, in fact, nothing in the formulation of quantum mechanics that mandates that it should apply only to the very small.

There are perhaps two ingredients required for the observation of quantum behaviour in an object.

The first is isolation. The world outside is full of sound and fury, such as other matter and radiation. If the object can find a way to isolate itself from this fury, it can evolve according to the simple rules of quantum mechanics.

An object that cannot isolate itself from the fury will find that the richness of quantum dynamics cannot be accessed. So its motion will be well described by the familiar rules of classical physics.

A thrown ball will follow a well-defined trajectory; it will not spread out as one might expect from quantum physics. A rolling stone will go up a hill until the supply of the energy of motion it had at the bottom of the hill is exhausted; it cannot possibly emerge on the other side of the hill as it might according to the rules of quantum tunnelling.

Even if an object is well isolated from its environment, it will not be perfectly isolated, so the properties of the object’s environment still matter.

Consider light. Photons of light interact only weakly with other photons, so that if we consider light propagating in near vacuum we have a well-isolated system. That’s the first ingredient.

What about frequency? Well, the electric and magnetic fields associated with visible light go up and down around 6×1014 times per second.

In this case, the energy associated with a photon of light vastly exceeds the energy scale of the likely thermal environment. One can tell a similar story for the electronic levels of isolated atoms. Thus very small objects are more likely to possess the ingredients required for the observation of quantum phenomena.

Scale things up a bit

Let’s go bigger and more tangible. Instead of thinking about the electromagnetic fields of light or the electronic levels of an atom, how about the motion of a macroscopic, massive object? Can we make and observe such an object behave according to the rules of quantum physics?

The answer, as we report today, is yes.

In an experiment, performed recently in the laboratory of Professor Mika Sillanpää at Aalto University in Finland, we set up two microfabricated vibrating circular membranes, like drumheads.

Each was about the width of a human hair and we were able to measure them in a state that exhibited the quantum property of entanglement.

The two drumheads were brought into an entangled state through careful driving of a superconducting electrical circuit to which both were coupled.

While these drumheads may seem small on the human scale, they are huge on the atomic scale – each drumhead is composed of trillions of atoms.

These drumheads are the largest objects to be prepared in an entangled state, and this experiment is perhaps the closest approach to a literal implementation of the famous thought experiment of Einstein, Podolsky and Rosen that first studied the phenomenon that became known as entanglement back in 1935.

Why we did it

So why should we take the trouble to demonstrate quantum physics with massive, macroscopic objects? There are two answers: one fundamental and one applied.

On the fundamental side, this demonstration gives us greater confidence that the laws of quantum physics do indeed apply to large objects.

But will this continue to hold true as the size and mass of the objects in such experiments is increased? We don’t know.

Tabletop experiments with massive objects bring forth the possibility that such a question might one day be answered.

On the applied side, one may ask: what could mechanical quantum systems offer in this electronic age? But mechanical systems are more common than many people realise.

While the processing power of a future quantum computer might rely on microwaves in a low-temperature laboratory environment, quantum communications systems require light propagating through optical fibres or free space.

Mechanical systems can act as intermediaries between these worlds and thereby contribute to the realisation of a quantum internet.

While it is hard to say exactly where these experiments might ultimately lead, it is clear that the era of massive quantum machines has arrived, and is here to stay. 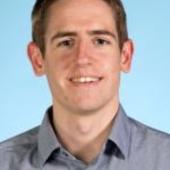