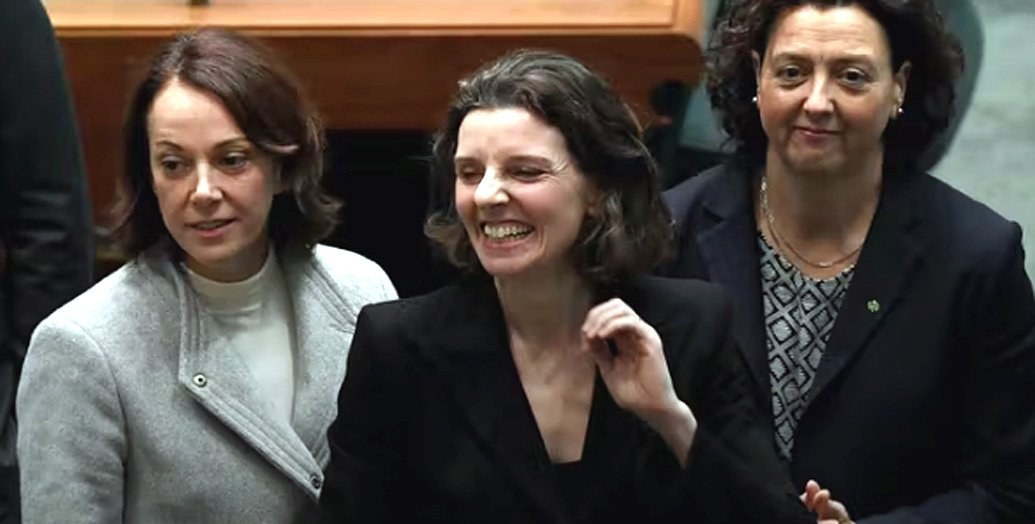 David Pocock, the progressive independent who broke the Liberals’ stranglehold on one of the two ACT Senate seats, wouldn’t have expected to find himself allied with Pauline Hanson before even being sworn in.

But, as they say, politics makes strange bedfellows and the two have already discussed trying to get Anthony Albanese to compromise on his decision to slash crossbench staff numbers.

The staff cut will just be the start of Labor’s search for general savings, culminating in the October budget. Some of those will have the public much more agitated than will trimming politicians’ entitlements.

But Albanese’s action, without prior consultation, has come as a rude shock to the “teal” independents who, together with other new members, arrived at Parliament House this week for their orientation.

The teals have been feted in the media and seen by many voters as part of a new breed of politician. They probably didn’t expect such rough treatment, delivered in a letter from the new PM.

Existing crossbenchers, with years of experience of how politics works, may have been less surprised, but they were also dismayed.

In the last parliament crossbenchers had four extra staff, above those allocated to government and opposition backbenchers. With a much-expanded crossbench, Albanese has brought that back to one extra (two for those in larger electorates).

Apart from expense, he’s arguing fairness with other backbenchers. He’s also saying plans to beef up the parliamentary library will provide more resources for crossbenchers.

The crossbenchers say they don’t have the backup a major party gives its own MPs, and that the library can’t provide the sort of tailored advice a staffer does, let alone be as fast with assistance, or available around the clock.

Crossbench senators make a further case. In a chamber where the government is in a minority, their votes matter more than those of crossbenchers in the lower house, where Labor will have the numbers.

This applies particularly to someone like Pocock who, with the Greens, is expected to assure the government of its majority on various pieces of legislation. (The Greens, treated as a party, haven’t had their staff reduced but the same number will service a total party room that has increased from 10 to 16.)

When he returns from overseas, Albanese will address the complaints. His choice is staying tough (the public wouldn’t care) or buying some crossbench goodwill with a conciliatory gesture.

The staffing dispute has provided immediate controversy but in this new parliament, which first meets July 26, there’ll be more fundamental issues around the crossbenchers.

The crossbench is, of course, diverse. In the lower house, there are Greens, the new teals (obviously individuals in their own right) and other independents, as well as the idiosyncratic Bob Katter, from the deep north.

In the Senate, the crossbench ranges from Greens to the two Hansonites and Ralph Babet, elected from Victoria for the UAP.

The teals have a lot to live up to, after their high-profile campaigns. They are different from many other MPs. They haven’t been political staffers or come up through the rugged internals of parties (although a couple hail from well-known political families). They talk about doing politics differently. But without the balance of power in the House of Representatives, will they be able to drive meaningful changes in how things are done?

And what of policy substance can the lower house teals achieve? They need to demonstrate they’re relevant.

Lacking hard power, they can only operate through influence and advocacy. This is possible, though difficult. For example, in the last parliament independent Helen Haines’ release of a private member’s bill for an integrity commission added to the public pressure. She (and others) will be anxious to have a voice on the issue as the government presses ahead with its legislation.

Today I met with some of the newer members of the crossbench to talk about what makes a strong integrity commission bill. pic.twitter.com/yxPhSRUSY5

One problem for the teals is that the Albanese government will address core issues they campaigned on, notably climate change and integrity. It was easy enough for them to rail against the Coalition before the election, but things are more challenging when they are (essentially) aligned with the government on these matters.

They can say Labor should go further (although there mightn’t be mileage in that), and there will be some scope for suggesting amendments to legislation.

Recent history indicates once crossbenchers are elected they dig in, but they aren’t invulnerable (as Kerryn Phelps found in Wentworth). The teals will have to show over the next three years they represent what we might describe as “value for votes”. And if the government delivers on climate, integrity and women’s issues, the teals will need to refresh their own agendas for the 2025 election.

The government has some interest in teals surviving, because they provide a firewall. They keep seats Labor can’t itself win out of Liberal hands. So it may look to give them a few modest policy wins.

The Greens-Labor relationship will be more potent and scratchy. The two parties are fierce competitors and there’s no love lost.

But Labor will require the Greens (plus one more vote) to get contested legislation through the Senate. The Greens will push for changes. It will likely often be a game of bluff and counter bluff.

The Greens party room is politically diverse – witness the radicalism of Victorian senator Lidia Thorpe who questions the legitimacy of parliament itself – so there could be some robust internal battles.

The Greens say their position on Labor’s climate legislation will be to improve, not to block. The first test will come early, when the government presents a bill to put into law its emissions reduction targets.

Given the Greens can’t get a more ambitious position they would, if they follow their own maxim, support the legislation.

Lastly, Pocock’s position is interesting. He won’t be the only go-to person for the government to obtain that additional Senate vote. Jacqui Lambie and her newly elected Senate colleague would be candidates.

But Pocock will be often in the spotlight. For his part, while reflecting his progressive views, he’ll need to remember he’s sitting in a traditionally Liberal seat. He won largely because the former incumbent, the deeply conservative Zed Seselja, was so unpopular. So if he wants to hold onto his place in the longer term, Pocock might have to perform a balancing act.