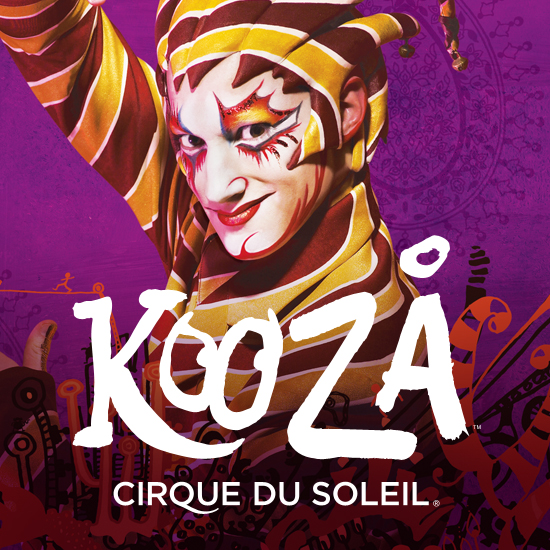 A night under the big top – it’s a magical space where time may often stand still, taking adults back to their childhood when the circus would roll into town. These days if one mentions circus, they would most often think of the global powerhouse that is Cirque du Soleil –  a company that has, over the last three decades or so reinvented the wheel, re-imagining this art form and contemporised its for a whole new generation of audiences, both young and the young at heart.

So, it is with much delight that Cirque du Soleil will be bringing their latest grand offering KOOZA to Melbourne in 2017- staged under the blue and yellow big top, it promises to be an adrenaline pumping night of surreal performance, dare devil stunts and mind bending acrobatics. The performance will feature no less than 50 performers and promises to be nothing short of a spectacle that will take you on a journey through surreal landscapes populated with unexpected characters and more than a few surprises.

“Between strength and fragility, laughter and smiles, turmoil and harmony, KOOZA explores themes of identity, recognition and power. The show is set in an electrifying and exotic visual world full of surprises, thrills, chills, audacity and total involvement. The name KOOZA is inspired by the Sanskrit word “kooza,” which means “box,” “chest” or “treasure,” and was chosen because one of the underlying concepts of the production is the idea of a “circus in a box.”

When people think of Cirque du Soleil, it’s not only their exhilarating performance style that first springs to mind, but also their lavish costumes, and here in KOOZA they promise to not disappoint. Taking inspiration from such sources as artist Gustav Klimt – most famous for his work, The Kiss, Graphic Novel, and even time travel to such places as India and Eastern Europe, all melding into an dizzy aesthetic that hints at Alice in Wonderland, Baron Munchausen and The Wizard Of Oz…

“It’s been a great challenge, but it’s also full of traps. You don’t want to exaggerate or slip into creating a caricature when you’re trying to capture a character.”— Marie-Chantale Vaillancourt costume designer.

Joining the cast of magical characters on stage will be a group of six musicians playing: trumpet, trombone, bass, drums, percussion, saxophone, electric guitar, and keyboard. There are also two singers who sing live during each performance. Here, the music hopes to demonstrate a sense of duality and draw upon the warmth and strength of human interaction and hint at a sense of playfulness, drawing inspiration from the swell of orchestral sounds, to the heady mix of the 70’s and traditional Indian music.

With  this work having received critical acclaim, The New York Times simply describing it as  “a back to basics affair, presents the usual rubbery contortionists, fearless tightrope walkers and other gravity–defying daredevils. But what is special about this new production is that Cirque introduces some carefully choreographed chaos and old–fashioned sideshow spark…the real pleasures are the genuinely funny clowns.” One can most certainly be assured that KOOZA will capture the hearts and imagination of Melbournians when they roll into town in January 2017. for more information visit www.cirquedusoleil.com/kooza

Previous articleWelcome
Next articleWhat’s on at the Market