The Songs of Robert Lloyd at Holy Trinity Church

Robert Lloyd has served the Australian and International Arts/Music world since 1986. Beginning in Adelaide he has travelled the world performing and composing his unique music and songs.

I have a couple of Robert’s albums but have seen little of him live so it was wonderful to be invited to see his performance at Holy Trinity Church in East Melbourne, a show that is part of the MelbourneEast Arts Festival.

The Holy Trinity has amazing acoustics and is the venue for some of our major Chamber Music exponents, and as Robert’s music is of a similar style this was the perfect venue for this concert.

Robert’s music and poetry is very potent, dark and often moody yet at the same time very uplifting, His show was a mixture of acoustic songs from his past albums, some poetry, a reading from his latest book and the wonderful Raija taking a featured couple of songs through the performance.

Robert’s 3 latest songs were played accompanied by his electric guitar and show a depth of growth in his style.

His Internationally recognised achievements include completing the writing and performing of his music in New York city followed by world tours of the dance works “Feral” [“shimmering, driving score” – New York Times] and “Nullarbor” for New York Choreographer, Molissa Fenley.

Robert has also written and performed for Australian Dance Theatre and The Alvin Ailey Company.

Since 2000 Robert has been writing, recording and touring his deep songs and poetry with guitar and piano to critical and audience acclaim in Australia, UK and USA. 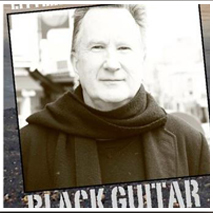 Robert’s first book of song lyrics, poetry and prose BLACK GUITAR was published in 2009 by Littlefox publishing in Melbourne followed by TIME BEING TIME in 2015.

Previous articleMuch Ado About Nothing, Solo piano recital by Tamara Smolyar, The Israel Camerata Jerusalem Orchestra @ ON THE HOUSE!
Next articleEco Threads