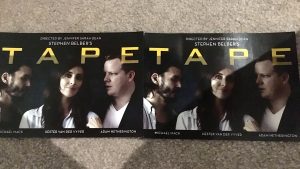 The Court House Hotel 27 April to 7 May

‘Play Dead Theatre’ presents a fascinating psychological drama about love, hate, and honesty between old friends. We witness the memory of an event from the past as three friends relentlessly pursue their version of an event that has haunted them for different reasons.

The play is simple, uncluttered, and powerful; the writing is taut and clever. Held in an intimate room at the Court House Hotel, we do feel inside the set and breathe in tandem with the actors. In a small venue, the audience is riveted during the peeling back of convenient masks, a physical fight, and unanticipated plot turns that cause us to question what is true, and what purpose confessions serve. The audience sat on the edge of their seats for the entire performance, and enthusiastically chatted about the play afterwards at the hotel’s bar.

Michael Mack plays ‘Vince’, a twitchy vigilante drug user, to perfection. We hate to love him, but his endearing quips and demand for accountability from his mate, Jon, pull us in. Mack’s role embodiment and varied talents are impressive.

And here I must ‘fess up about a personal connection with one of the actors – I know ‘Jon’ played by Adam Hetherington, having directed him in ‘International Stud’ recently. Without dripping of nepotism or familiarity, can I say that I’m already a champion of his acting and he pleased me again in this performance? I am delighted to see him inhabit a menacing, slippery anger in this play, and value the director who stretched him.

We love to hate Hetherington, the glib film maker who renames his tendency for physical force as “excessive linguistic pressure” while he slithers out of the facts. Even his acknowledgement is tinged with daring belligerence.

The typical fight that ensues between the reminiscence of old friends fuelled by alcohol and drugs is a master stroke.

Director Jennifer Sarah Dean does a magnificent job throughout, and blocking a fight that is both scarey and amusing is a counter intuitive coup. Her smart direction gets the best from the script, cast and crew.

Hester Van Der Vyer plays ‘Amy’ with a blithe disdain that defies the audience to guess her cunning twists and turns.

Congratulations to the production |stage manger Ray Bradbury, set designer Aline Brugel, and Callum Robertson’s lighting. The look and feel of this set, a basic motel room, is real and profound.

Less is more, as the armless empty chair is a pivotal point of the triangle as they exchange positions and dance with our points of view.

In fact, the team did so well on the set that on Wednesday night an audience member popped into the bathroom and shut himself in the toilet before realizing. The rumpled bed was matched by a chaotic woman who played Goldilocks with the seats before clumping down the stairs looking for the real toilet during the performance. The free drink with the tickets obviously overrode manners, but it is a tribute to the actors that they managed to soldier on and retain audience attention.

Costumes were consistent with characterization; Van Der Vyver was suitably dressed in legal grey with a burgundy overcoat that suggested the stale blood of despair at men’s behavior. Hetherington was puffed with self importance in collar and tie, while Mack was a faded scruff.

The play’s program was one of the best I’ve seen. Actually, was that the publishing icon Bob Session’s group who were upset that the programs were sold out? Mack, as actor, and creator of Play Dead Theatre Company, is also the graphic designer responsible for this beautiful, efficient piece of origami.

Given the excellence of this play, I am groping for some constructive criticism. Perhaps this conceptually talented group could fix the small detail of a couple of typos by using an administrative support function, like manderey.com.au for text. I would encourage a further season of this play so that more people can enjoy it, but keep the intimate venue. 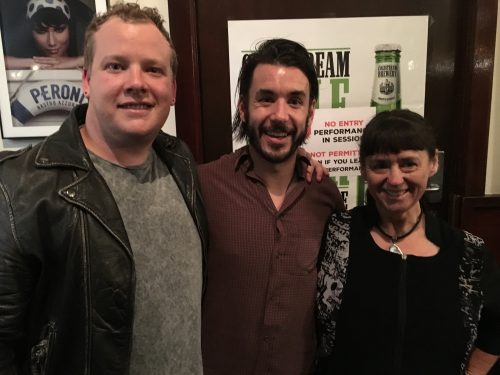