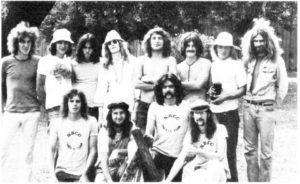 “The Long-Haired Cricket League, comprised entirely of musos and road crews, was created by Matt Taylor, with 3 or 4 teams, the one in the pic being The Northcote Rd Country Club, named after Matt’s address

Other sides were The Dank St. Desperates, The Stanley St. Gentlemen’s Batting and Bowling Association, and perhaps 1 other

We played for the Porpoise Shield, another creation of Matt’s

Both full teams would come to the pitch for the toss, where various psychedelic substances would be exchanged. Hence our opening bowler would often be peaking on acid as he bowled

Strangely, the cops would always park and watch with amusement.”

In January 1971, Chain reimagined the blues landscape by writing one of the first mainstream Australian blues hits “Black and Blue” and launched the album Toward The Blues

Matt Taylor disappeared, Phil Manning appeared under his own name at Sunbury Festival in January of ’72 and Chain performed but not the same line-up as in ‘71

What happened to make Chain, at the height of their popularity, dissolve?

This is my investigation

Its 1966, tired of living with prostitutes and penniless, Phil Manning ascends the stairs of the Bay City Union flat in Carlisle Avenue, Balaclava, Melbourne.  Phil heard that Bay City Union were looking for a guitarist.  On the street below in a taxi is Phil’s dad waiting to take his son back home to get an commercial artist job.  Glenn Wheatley [yes, that Glenn Wheatley] opens the door and Phil says “Hi I’m your new guitarist”.  He runs downstairs tells his dad he won’t be going back to Devonport Tasmania.  Glenn Wheatley turns to Matt Taylor and says “you know that blonde haired guitarist you like, he just joined the band”

Phil picked up the guitar to learn blues music at age 15 “to meet more attractive girls”.  He had studied classical piano for 8 years in Devonport Tasmania and began studying to be an Arts Teacher.  But once he started to play blues everything he’d learned about classical piano flew out the window.  He taught himself “Mel Bay” guitar chords.  Influenced by records he had heard from his basket-ball coach Ken Cole, who had a huge collection of R&B records.  An American folk singer Bill Hicks, he met while at Art College, had a collection of Robert Johnson and Lead Belly records. A particular impact was John Mayall’s Bluesbreakers “Beano” comic album.  And it wasn’t exclusively blues, he liked all genres including Bluegrass and Irish music

He came to Melbourne in 1966.  Tony Worsely and the Blue Jays were playing in Hobart, Vince Maloney had left the band.  Phil went backstage and applied for the guitarist’s position, two days later he moved to Melbourne. Within a couple of hours of arrival Phil was rehearsing [as a Blue Jay] in the Canterbury Ball Room.  There he saw The Purple Hearts with Lobby Loyde

Phil was in a state of awe

Playing suburban dances and large hall shows, in those days the surroundings weren’t very sophisticated, including showgrounds and country shows

After a stretch of playing showgrounds and sleeping on tent floors in North Queensland he was sick of it, that’s when he left for Melbourne. Phil heard from 10th Avenue that Bay City Union were looking for a guitarist.  So when his father came to take him back to Devonport to become a commercial artist, Phil made the decision to become the Bay City Union’s new guitarist

[I haven’t got a clear view on Bay City Union because my dog, as a puppy, chewed “I Remember When I Was Young: The Matt Taylor Story” from pages 54 – 73.  I don’t know why this part of the book was so tasty to her or if she was trying to tell me something but unfortunately about a third of all these pages are gone]

Bay City Union came to an end in May 1968 after recording only one single “Mo’reen”. Trevor Bagnall left first then Glen Wheatley who went on to the Master’s Apprentices [The black and white clip doesn’t show the horn section]

From Chain Live CD liner notes:  Phil, 3 months later, joined “Beaten Tracks” from Perth.  [hang on he was with the Lonnie Allen Review and then…] Beaten Tracks had won a trip to Melbourne for winning the Perth heats of the Hoadley’s Battle of the Sounds.  At that time, Beaten Tracks were Warren Morgan (organ and vocals), Dave Hole (guitar, vocals), Ross Partington (vocals), Murray Wilkins (bass) and Ace Follington (drums)

In Melbourne Dave Hole, now recognised as one of Australia’s blues guitarists par excellence, decided to leave the band 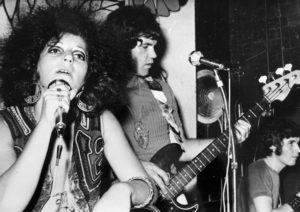 From Chain Live CD liner notes: [The enigmatic Wendy] Saddington was a soul/blues stylist in the Aretha Franklin/Etta James mould and she named “The Chain” after the soul classic ‘Chain of Fools’

According to “Wendy Saddington: underground icon” exhibition notes: She emerged fully-formed in her rock and roll persona, in her adolescence performing live with Melbourne band, The Revolution c. 1967.  Wendy would have then been approximately sixteen years of age.  She then joined the Adelaide band, James Taylor Move the following year.

Video: Wendy Saddington “Nobody Knows You”

From Chain Live CD liner notes:  The Chain moved to Sydney where they entered the NSW heats of the 1969 Hoadley’s National Battle of Sounds in July

While Morgan and Manning no doubt harboured a desire to explore deeper musical waters, they were willing to paddle in the pop pool for now even donning colourful medieval gear in an effort to put on a good show for the contest  [from the colour photograph in Chain Live taken at the time, they appear to be wearing purple wizardry coats with large ‘moon and stars’  embroidery emblems.   How they played their instruments in this gear is beyond me]

They made it all the way to the national final held at Melbourne’s Festival Hall, placing 5th behind the Avengers (4th), the Valentines (3rd), Aesops’s Fables (2nd) and the winners Doug Parkinson In Focus.

Interview with Ron King of The Foreday Riders 6th July 2017:  In the 60s […] there were a few good rhythm and blues bands around playing the discos and sort of clubs in Sydney.  These people Python Lee Jackson, Billy Thorpe. All those sort of bands and [The Foreday Riders] were one of the few bands playing straight blues. […] So come the 70s Blues was starting to take off and as Jeff [King] said “no shortage of work” there was more than we could handle actually. […] Quite a few nice little outfits started playing mainly in the city and the inner west in pubs.  [And although The Foreday Riders did NOT indulge] “there was plenty of drugs around the scene here in Sydney in the 60s and 70s”

Murray Wilkins, the bass player, went back to Perth disillusioned with the struggle to earn a decent wage from bands

About 6 months later, June 1969 the newly formed “The Chain” went back to Melbourne without Wendy, leaving her and according to Jiva Lawler, “Wendy Saddington was in a wild  Sydney lesbian scene”